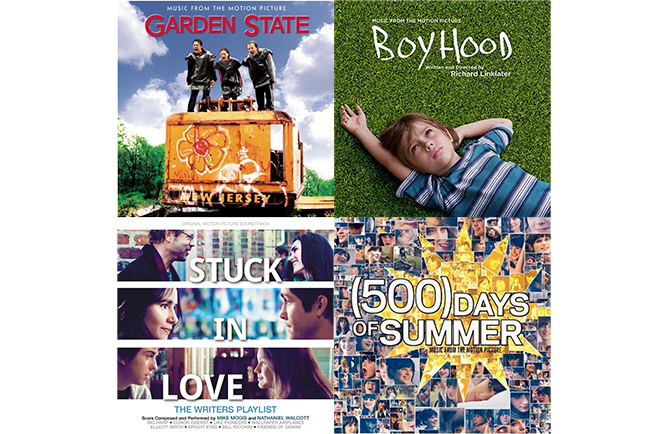 Regardless of whether you’re in a restaurant or driving down the road, when “Don’t You (Forget About Me)” rings through the speakers, an image of Judd Nelson throwing his fist into the air in “The Breakfast Club” probably comes to mind. Movie soundtracks have the power to make you feel like you’re in a film and can often lead you to find new artists and songs you might not have discovered otherwise. Here are four soundtracks that are definitely worth a listen.

Richard Linklater’s award-winning “Boyhood” illustrates the growth of one boy as he transitions from maneuvering grade school lunch lines to packing up for college. It’s only fitting that the soundtrack displays a similar evolution.

Linklater filmed the movie over a 12-year span from 2002 to 2013 and incorporates everything from the folksy sounds of Wilco and Bob Dylan to more modern hits from Cobra Starship, Gotye and Vampire Weekend. The album includes alternative classics, such as “She’s Long Gone” by The Black Keys and “Yellow” by Coldplay, and more obscure indie tunes, including “Hero” by Family of the Year.

The movie explores the life of an American boy with divorced parents, focusing on relationships rather than complex plot. Just as the storyline maintains simplicity, the music played throughout is relatively slow-moving and calming — perfect for study sessions or walking to class.

The 2009 bittersweet love story begins with the line: “This is a story of boy meets girl.” Images of a young girl and boy flash on the screen accompanied by Regina Spektor’s “Us,” the first of many alternative hits that support the film.

In the movie, Joseph Gordon-Levitt’s and Zooey Deschanel’s characters share a similar taste in music. They first exchange words in an elevator while Gordon-Levitt’s character has The Smiths playing through his headphones. They later go on a stereotypical record store date, scouring through albums and arguing over The Beatles.

Music plays a large role in the film’s central relationship, and the soundtrack doesn’t disappoint. The album includes upbeat, joyous tunes, including Hall & Oates’ “You Make My Dreams Come True” and The Temper Trap’s indie hit “Sweet Disposition.” Just as the couple’s relationship isn’t all joyous, the soundtrack contains some more brooding songs such as “Please, Please, Please, Let Me Get What I Want” by The Smiths and “Bookends” by Simon & Garfunkel.

Not only did Zach Braff write, direct and star in the 2004 film “Garden State,” he also handpicked the songs on the soundtrack, resulting in a Grammy Award in 2005 for Best Compilation Soundtrack Album for a Motion Picture, Television or Other Visual Media.

The film follows an actor who returns to his hometown to attend his mother’s funeral. During the trip, he rekindles old friendships and forms new ones. The music fits seamlessly with the film from the moment Natalie Portman’s character shares the song “New Slang” by The Shins with Braff’s character in a doctor’s office waiting room to the scene when the characters stare down at an abyss in the pouring rain to Simon & Garfunkel’s “The Only Living Boy in New York.”

Braff said, “Essentially, I made a mix CD with all of the music that I felt was scoring my life at the time I was writing the screenplay.” With additional songs such as “Such Great Heights” by Iron & Wine and “Don’t Panic” by Coldplay, it’s no wonder the compilation garnered so much acclaim.

The 2013 independent romantic comedy “Stuck in Love” follows the love lives of an author and his two writer children. Both humorous and heartfelt, the film illustrates the heartache the author experiences watching his ex-wife love a different man.

Actor and musician Nat Wolff plays the author’s son, who finally gets the chance to be with his high school crush. One of Wolff’s songs “I Won’t Love You Any Less” appears on the soundtrack. With somber-sounding songs including “Between the Bars” by Elliott Smith and “A Mountain, A Peak” by Bill Ricchini and fast-paced, innervating songs such as “The Calendar Hung Itself…” by Bright Eyes, the soundtrack illustrates the painful and confusing aspects of love apparent throughout the film.

The soundtrack also sheds light on lesser-known bands. It incorporates upbeat songs from smaller names such as “American Man” by Rio Bravo and “Polkadot” by Like Pioneers.