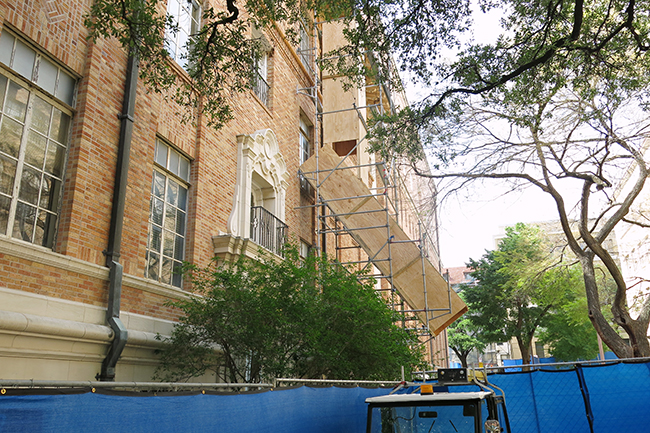 Although the University will not receive the Legislature’s $75 million allotment for construction until September 1, renovations have begun on Welch Hall’s oldest wing, originally constructed in 1929.

The renovations include adding new classrooms and labs, such as labs for organic and inorganic synthetic chemistry, analytical chemistry and two for the Freshman Research Institute, said Stephen Martin, chair of the chemistry department, which is largely housed in the wing.

“These are going to be really state of the art classrooms that are designed with innovation and education in mind,” Martin said.

The 1929 wing of the building lacks sufficient airflow, water and electricity necessary for researchers to conduct their work, said Dean Appling, associate dean of the College of Natural Sciences.

“[The building] is pretty far behind,” Appling said. “It’s been an issue in keeping our research going at state of the art levels. I think it’s probably impacted our recruiting over the years.”

The oldest wing of Welch Hall, which houses much of the chemistry department, is currently under construction. Emma Whalen | Daily Texan Staff

The east end of the 1929 wing was renovated in 2011, and the difference between the two sides of the wing is stark, according to Martin.

“It’s kind of like going from … West Berlin into East Berlin before the wall came down,” Martin said.

The wing contains labs where research groups conduct work in organic and inorganic synthetic chemistry. The section lacks the capacity to support fume hoods — ventilators that intake air to limit exposure to harmful vapors and fumes — at the level necessary for such research, Appling said.

Chemistry graduate student Nolan Waggoner, who is a member of the Humphrey Research Group, said fume hoods in the group’s labs would intake too much air when the seasons changed because of the change in temperature.

“When the [fume] hoods would pull real hard, it would cause the doors to be a little bit more difficult,” Waggoner said. “[There] was more circulation in the room, and also it was energy waste. But, as far as safety, it was probably more safe for us.”

The group relocated in October in anticipation of the upcoming renovations. Group members, with assistance from crews coordinated by the building managers of Welch Hall and the Hackerman building, carried and trolleyed lab equipment across 24th Street to their new lab on the sixth floor of the newer Hackerman Building, which was completed in 2010.

Other faculty, staff and researchers in the 1929 wing have relocated to the Hackerman Building and other parts of Welch because of the renovations as well, but much of the wing was already empty because the facilities were insufficient for researchers’ work, Appling said.

“We had already moved people out of that space because the fume hoods had basically quit working,” Appling said.

Chemistry graduate student Pranaw Kunal said his research group would likely return to Welch Hall once the renovations are complete in fall 2016.

The renovations to the rest of Welch Hall, which the $75 million will help fund, will begin after the completion of the 1929 wing and will be completed in several phases over a minimum of three or four years, Appling said.

“We’ll start a design process probably in September,” Appling said. “The building will remain operational through the entire renovation process, but pieces of it will be taken out and serviced during each stage of renovation.”