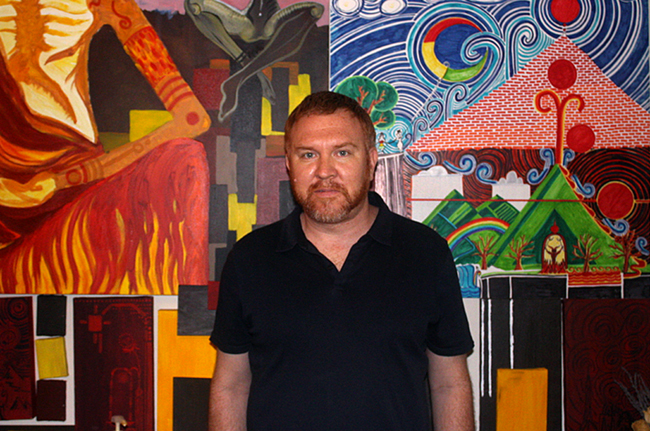 Forrest adopted the moniker three years ago after he began drawing scenes from around Austin, pinning his pieces onto trees to create impromptu art displays. Traces of his project, which he calls ArtTree, can periodically be found in places around the city, including West Campus and Lady Bird Lake’s trail.

“It’s as simple as some Sharpies and paper. That’s the cool thing,” Forrest said. “I can walk around with my backpack day or night, drawing whatever is in front of me.”

Reminiscent of artists such as Pablo Picasso and Vincent Van Gogh, Forrest said he uses a technique using simple lines to create complex pieces. Many of his works include designs similar to the skies in Van Gogh’s “Starry Night.”

ArtTree exhibits often feature city icons such as the Capitol, the UT Tower, Spiderhouse Ballroom and Hole in the Wall. Forrest said most of his pieces are political or environmental, reflecting local and national current events.

“I want people to understand the issues [in my work],” Forrest said. “If someone doesn’t understand what they’re looking at, I want them to look it up.”

Once Forrest tacks his work to a tree, he said he lingers around to have conversations with curious viewers. Other times, he sets up his work and disappears, returning a few hours later only to collect his pieces.

“How do you get the attention of kids with their phones, looking down?” Forrest said. “You just cover the place with crazy art. They actually stop, turn off their things and ask you questions. It’s pretty cool when that happens.”

Usually, he said, his ArtTree displays successfully capture the attention of passersby, who often want to know more about his work. Forrest said he wants ArtTree to make people pause for a moment and think.

“People first like [the art] because it’s colorful and catchy,” Forrest said. “When you really look at it, you can see there’s a story behind it.”

As a long time resident of Austin, Forrest said he personally experienced the gentrification of West Campus and ArtTree is partially an effort to bring creativity back to the area.

“I feel like there used to be more unregulated artists around here,” Forrest said. “[West Campus] used to be a cool hippie place where art was everywhere. Now, it’s all high rise buildings.”

“I think the virtue of the stuff [Forrest] does is consuming,” Regidor said. “He’s not all business oriented about it. He represents the places and things people like to see and do in an open form of art. It’s the type of art you don’t see in the gallery.”

Although Forrest said he is currently preparing to take the Hawaii bar exam, his future in law and possible relocation won’t stop him from pursuing his artistic endeavors.

“I would love to keep doing it and have people run with the idea of art in public places,” Forrest said.

Forrest said creating art is simple and anyone can do it. He hopes his ArtTree displays will encourage others to share their originality with their communities.

“I would really hope that people take some time to create something and share it,” Forrest said. “Join in — make some art and tape it on the wall.”