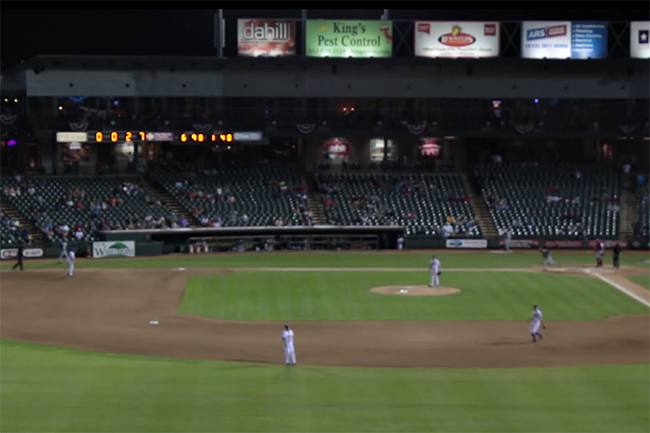 Designated hitter Joey Gallo waltzed into the batter’s box in the bottom of the fourth inning.

The five-tool phenom had the bases loaded with one out, and the Round Rock Express was in need of a spark.

On the first pitch, he swung and lifted the ball toward the right field wall. The ball glided in the warm summer air, fans stood as the ball got closer to the fence.

The ball hit the base of the foam wall for a double and drove in two runs.

Round Rock ousted the Nashville Sounds 6–3 on Monday at Dell Diamond to improve their record to 49–34.

In the game’s first inning, the Express fell behind 1–0, when Sounds shortstop Ryan Roberts doubled to right center field to drive in Craig Gentry, center fielder and leadoff hitter, who started the game with a single and immediately stole second.

Round Rock had a small rally in the bottom of the third inning to get the run back. First baseman Brett Nicholas singled with one out, subsequently followed by a double from shortstop Hanser Alberto.

With runners at the corner, center fielder Ryan Strausborger stepped in with a chance to tie the game. He did his job — although he grounded out, he brought in Nicholas to tie the game.

Nashville scored a run in the next inning to take a 2–1 lead.

Then, in the bottom of the fifth inning, before Gallo teed off, third baseman Ed Lucas sent a ball that barely flew over the left field wall to tie the game.

Gallo’s double gave Round Rock a 4–2 lead, giving Round Rock the edge they needed to win.