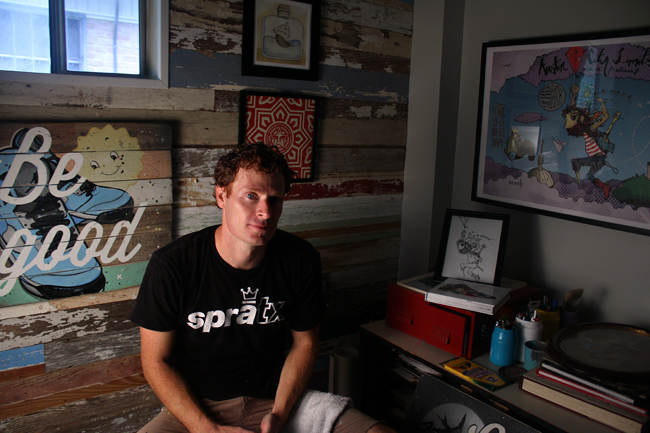 At their month-long exhibit, called “Grounded,” the artists will display work influenced by their life-long search for stability and the difficulties in finding roots in new places. The gallery opens at 6 p.m. Thursday at Austin Art Garage.

“The show is about sharing what grounded means to me now and what it means to me as a kid and balancing the two out,” Eatherly said. “You try and find out the techniques to make you happy when you’re younger and when you’re older you try and to be centered and grounded no matter what.”

Johnston, who signs his work under the moniker “Truth,” said his wife, friends, and faith not only keep him grounded — but inspire him. He also said he draws from his time spent travelling overseas and his childhood interests, such as Michael Jordan and new sneakers.

“Painting something that I was completely obsessed with as a kid transports me back to that time,” Johnston said. “Sometimes it can be something small or something big and obvious that makes that connection.”

Eatherly, who began painting at age 12, spent much of his childhood playing in vacant lots and buildings while skateboarding and riding BMX bikes. He said the energy he once spent on exploring is now used to incorporate the places he would encounter as a child into his artwork.

“I have a lot of things culture-wise I want to put into my art — that rusty abandoned space that doesn’t get put into a lot of fine art,” Eatherly said. “It goes onto a canvas that reaches people who just know abstract or still life and don’t understand that culture. I want to try and introduce them to something different.”

Johnston and Eatherly said the show gives them a chance to share work they don't usually get to show off in their street art. They said painting in the street often requires them to produce  work more quickly.

Joel Ganucheau, one of the co-founders of Austin Art Garage who helps curate the gallery, said he decided to create the joint show for the artists after seeing their dedication to their street paintings and canvas works.

“We tend to reward artists we feel are working hard by letting them have a show and really pushing and promoting them,” Gauncheau said. “It gets the artist excited and gives them a nudge to crank out a new body of work.”

Although people see the artists’ paintings most often on Austin walls, Gauncheau said their gallery pieces are stylistically similar to their street work but with much more detail.

“Their art is very complimentary of each other’s,” Ganucheau said. “Their pieces can be hung up next to each other, and they go really well together.”

The two artists said they had admired one another’s work from afar before meeting. Now, it has been around three years since they formed a friendship, and both said they are grateful for the chance to work together.

“It was a lot of fun and a chance to push myself,” Johnston said. “Working on this show was a dream come true.”