On Thursday, South Carolina Gov. Nikki Haley signed a bill into law to remove the Confederate flag from Statehouse grounds, one of the latest responses to a nationwide movement to define the line between glorifying Confederate history and remembering it.

A statue on campus depicting Jefferson Davis, the president of the Confederacy, has seen controversy in recent years after its installation on the South Mall in the early 1930s.

But the Davis statue is not the only relic on campus that has ties to the Confederacy or racist incidents. There are several monuments, buildings and relics on campus with connections to controversial history.

Confederate statues on campus: Earlier this year, the Jefferson Davis statue was vandalized on three separate occasions. Student Government President Xavier Rotnofsky and Vice President Rohit Mandalapu submitted a resolution to SG in March for the removal of the Davis statue. A third vandalism incident occurred June 23, along with the vandalism of two other Confederate figures, Robert E. Lee and Albert Sidney Johnston, in the South Mall. After this incident, Fenves announced a committee to investigate and review the situation of the statues’ places on campus. The committee is expected to make a decision by August 1 for Fenves to have the final decision as to whether the statues will be removed.

In 1989, the Davis statue was bleached and suffered permanent damage. In 1990, protests occurred around the statue following racial incidents during the annual Spring Roundup. Zeta Tau Delta was accused of painting a car with the phrases “F*ck coons” and “F*ck you n*gs die” and Phi Gamma Delta faced charges for distributing T-shirts with racial images. 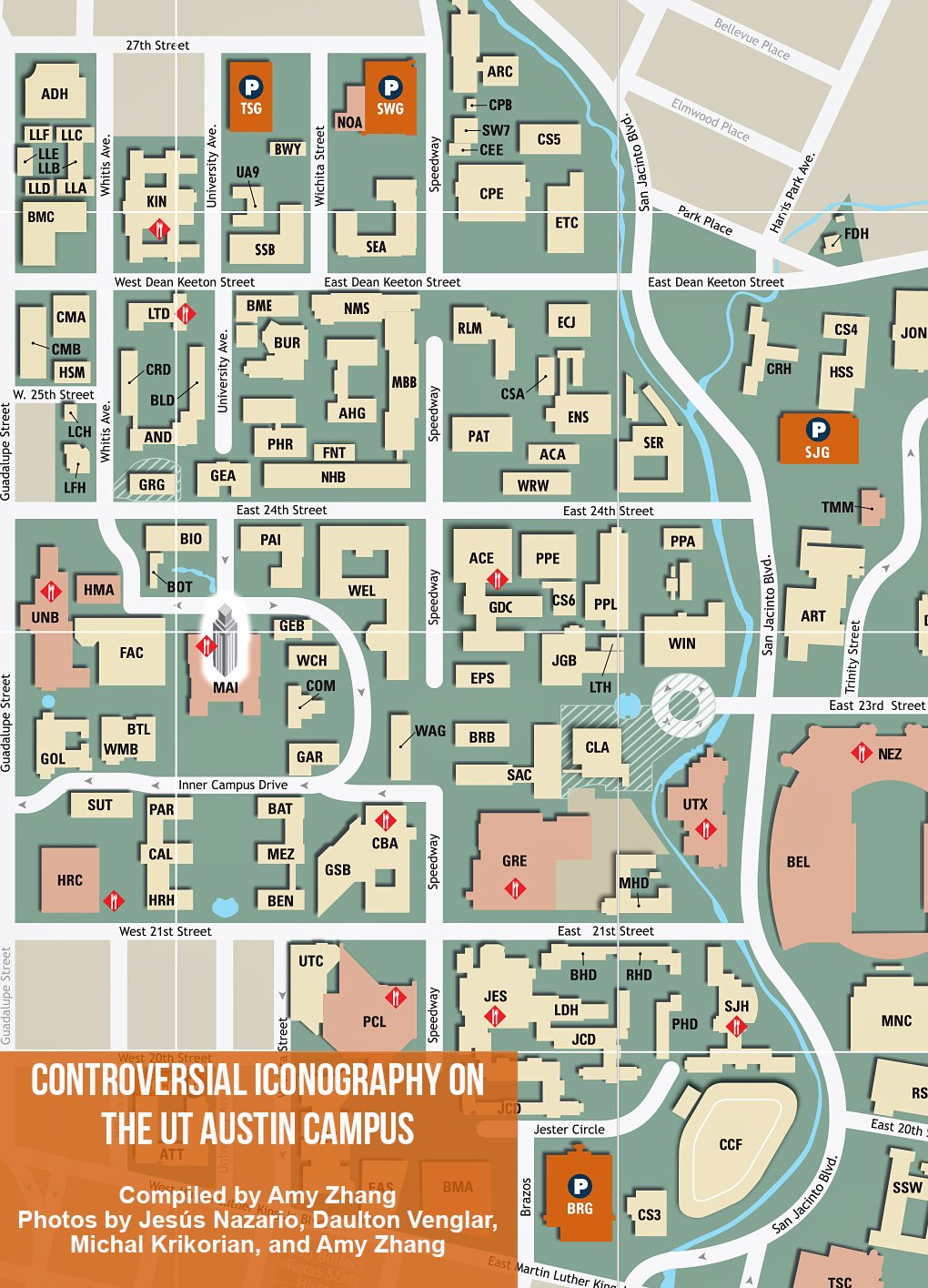 CreekSide: In 2010, former President William Powers Jr., with a unanimous vote from the System Board of Regents, agreed to rename the dormitory Simkins Hall to Creekside Residence Hall. William Stewart Simkins was a confederate soldier, a UT law professor for over 30 years, and founded the Florida Ku Klux Klan with his brother, Eldred.

The Confederate Preamble: In the Life Science Library of the UT Tower, the preamble of the Confederate Constitution is engraved in the wall over the entrance of the stacks. This was proposed in the original plan for the Tower construction in 1932 and installed in 1937 upon the building’s completion.

Littlefield Fountain: George Littlefield, a generous donor to the University, was an officer for the Confederate army and ardent supporter of the South even after the war.  Littlefield wanted an archway at the southern entrance of the campus to honor Texas and Southern figures. Sculptor Pompeo Coppini, responsible for many monuments on campus, including the Littlefield Memorial Fountain, advised against this plan, fearing the image of the Civil War would not last.

Today, however, there is an inscription by the Littlefield Fountain that reads, “To the men and women of the Confederacy, who fought with valor and suffered with fortitude that states’ rights be maintained and who, not dismayed by defeat nor discouraged by misrule, builded from the ruins of a devastating war a greater South. And to the men and women of the nation who gave of their possessions and of their lives that free government be made secure to the peoples of the earth this memorial is dedicated." Law assistant professor Joseph Fishkin said this reference to "misrule" refers to the period during Reconstruction when black Texans held some political power before white racial hegemony was restored.

T.S. Painter Hall: President Theophilus S. Painter, despite being a defendant in the case for Heman Marion Sweatt to be the first African-American into the UT law program, said Sweatt “is a citizen of Texas and duly qualified for the admission to the Law School at the University of Texas, save and except for the fact that he is a negro.” Despite Painter’s defense of segregation, Painter Hall, originally named the Physics Building, was renamed in 1974 and the T.S. Painter Centennial Professorship was established in 1984.