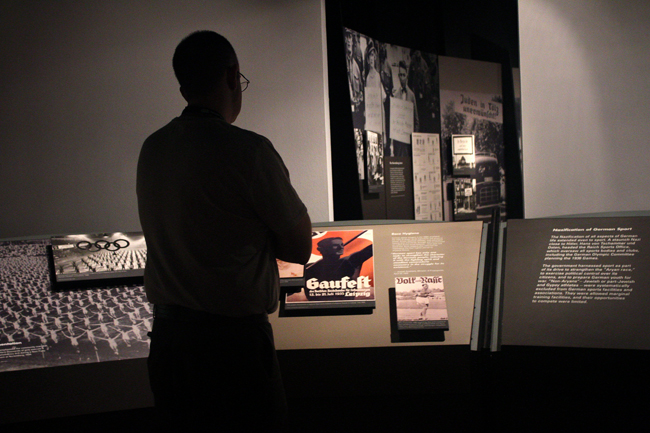 Imagine Darrell K Royal-Texas Memorial Stadium. At capacity, it can hold roughly 100,000 people  — a greater number of people than many students can imagine ever being in the same place with at once. Multiply those 100,000 fans by 60, and you have the Jewish death toll in the Holocaust. You would have to fill 110 stadiums to reach the 11 million total Holocaust victims.

But this season, the stadium serves as more than just a means to visualize the number of victims in the Holocaust atrocities. Until January 29, the North End Zone will also feature “The Nazi Olympics: Berlin 1936.” I urge you to take the opportunity to visit.

To usher in the 2016 Olympics, this university has the privilege and responsibility of hosting this exhibit from the U.S. Holocaust Memorial Museum. Free and open to the public, it details Adolf Hitler’s rise to prominence in Nazi Germany in the 1930s, the Olympic Games hosted by the Nazis in Berlin in August 1936 and the political and moral issues that followed.

When considering the history of the 1936 Olympic Games, it may seem strange that the International Olympic Committee would allow a totalitarian, genocidal regime to host these global games. But Germany had not yet adopted such extremism when the committee selected Germany to host in 1931. Even so, controversy plagued the venue selection.

The United States and other countries voiced their opposition at the time, and a boycott nearly succeeded in forcing a venue change. In the end, the games went on, despite Nazis excluding Jewish athletes and belittling African-American participants, such as track and field gold medalist Jesse Owens. Not long after the games ended, the Holocaust unfolded. Less than a decade after the 1936 Olympics, 6 million Jews and 5 million additional victims had perished at their hands. 110 full stadiums of people, gone.

The exhibit’s message has tremendous breadth. We see the extreme risk of remaining bystanders to injustice, the role sports play in political campaigns and the core of a prejudice that inspired such atrocities. The exhibit holds lessons of history, culture, religion and race. It examines the origins of systematic persecution and murder rather than just focusing on the effects.

The stadium exhibit will not teach us all we need to know about the issue. But as Holocaust survivors continue to pass — historians consider millennials the last generation to have the privilege of meeting Holocaust survivors and receiving their firsthand accounts — Holocaust educators must find new, creative ways to teach its lessons. This exhibit is one of those ways.

Times have changed, but in many ways they have not changed much. Examining the roots, rather than the consequences, of these issues is the best way to creatively teach future generations. And analyzing the 1936 Olympics and the state of Nazi Germany at that time allows visitors to take a step back, consider the evolution of an extremist regime and recognize the dark possibilities when such unrest escalates.

At football games this season, remember the 110 stadiums worth of people who lost their lives while much of the world remained silent. But don’t just remember them; rather, take the extra few hours to consider why the Holocaust happened. Visit the North End Zone, connect with the exhibit, understand its similarities to today’s societal struggles and engage with this tragedy so its lessons may be brought into the present.

Epstein is a journalism and Plan II senior from Dallas.