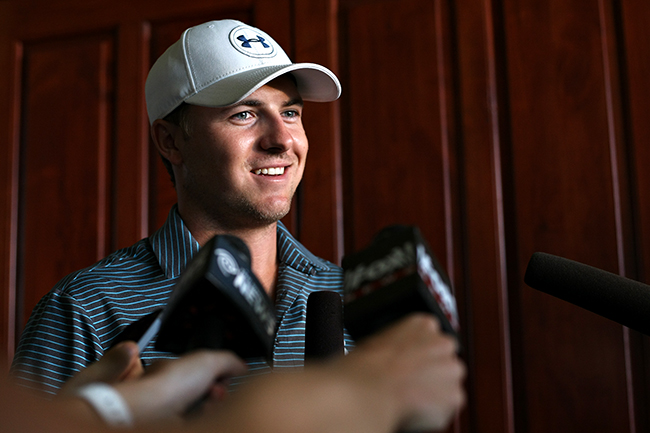 This year has been incredible for former UT golf star Jordan Spieth.

So far, he has won both the U.S. Open and Masters. After winning the John Deere Classic on Sunday in Illinois, Spieth heads to St. Andrews for The Open Championship this weekend.

If Spieth wins The Open, he’ll have completed the third leg of the grand slam. A grand slam in golf has only been completed once — in 1930 by Bobby Jones — and occurs when a golfer has won all four major championships — the Masters Tournament, the U.S. Open, The Open Championship and the PGA Championship — in the same year.

“I recognize where I’m at in the history of the game, and I recognize what could happen going forward,” Spieth said on ESPN’s Sunday Conversation segment. “So why not work as hard as I can to keep on improving a little more from the last month for the rest of the year and see if we can do something crazy.”

Spieth has only played one round at St. Andrews — four years ago as a 17-year-old amateur golfer. But, coming out of the John Deere Classic, Spieth said he’s happy with where his putting is at; it’s the drives that he needs to fine-tune.

“I hit some horrid iron shots this week when I had to take some off of it, and that’s the definition of what you do over there if the wind picks up and the conditions are bad,” he said. “You have to be able to hit three-quarter punch shots and be able to control those.”

The unpredictable winds and tough layout trip up even the most veteran golfers, but other pros, such as American golfer David Duval, seem to think Spieth can handle whatever the course throws at him.

“If you’re playing well you can play anywhere, regardless of the nuances and intricacies of the golf course,” Duval told BBC. “Jordan has proven he has all the tools to win anywhere.”

One tool Jordan is using to prepare for the major tournament is a simulator. Standing in a room with a drop-screen, Spieth can be virtually transported to different golf courses around the world and tee-off on holes by driving his ball into the screen. When the ball hits the screen, a virtual golf ball picks up in the simulator with all the data of the real-life ball that Spieth hit.

Golf veteran Ian Poulter, who finished second in the 2008 Open Championship, told BBC sports that he also has a simulator and said it was “amazing.”

"I use the same simulator that Jordan uses. They're very good from a visual standpoint,” Poulter said. “but there's nothing like the real thing. There is no proper preparation apart from playing, but I can tell you Jordan will be there or thereabouts."

An earlier version of this article contained a factual error. It has since been updated.