Science Scene: Competitive eating can bring fame and fortune but at a heavy price 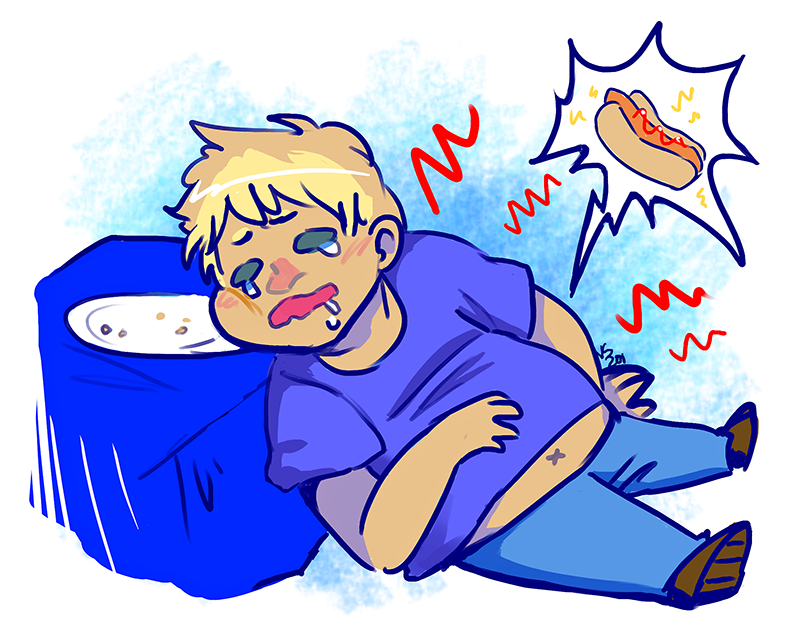 There is a sport for UT students who can’t throw a frisbee, kick a soccer ball or run a mile: competitive eating.

While local speed-eaters can contend for glory and profit at 16 different Austin locations, larger competitions offer greater rewards, such as the opportunity to travel and make some serious dough (and not the ingested kind). Nathan’s Famous Hot Dog Eating Contest, the Wimbledon of competitive eating, took place on July 4 in Coney Island, N. Y. The winner, Matt Stonie, received $10,000 and the priceless mustard-yellow belt for eating 62 hot dogs.

Until 2007, there were no scientific studies on the effects this degree of hot dog consumption had on the human body. This changed when competitive eater Tim Janus offered to dine for science at the University of Pennsylvania.

Scientists at UPenn compared Janus’ stomach to a control subject, a slightly bigger man who had never eaten competitively. They instructed Janus and the control subject to eat as many hot dogs as possible in 12 minutes.

The control subject was only able to eat seven hot dogs before he stopped – he said he would be “sick” if he ate any more. The scientists reported his stomach had not noticeably expanded, either on X-ray imaging or when he lifted up his shirt.

Janus began gulping down two hot dogs at once from the start time. He finished 36 hot dogs before the scientists made him stop. They worried his massively distended stomach “could be associated with a small theoretic risk of gastric perforation” — it could bust open.

Despite researchers’ concerns, Janus never reported any discomfort and wanted to continue eating. Unlike the control subject, his upper abdomen was swollen to the point the researchers said he looked pregnant.

The scientists concluded in the American Journal of Roentgenology that Janus’ competitive eating skills were because of his stomach’s ability to swell and remain swollen, passively accepting food. Usually peristalsis, muscle contractions that move food down the digestive tract, prevent Janus’ stomach’s degree of expansion. He had changed the way his stomach worked through years of gradual training, stretching his stomach past the point of discomfort over and over again.

Significant long-term health risks occur when competitive eaters alter their bodies. Janus told scientists he never felt full and he kept his weight down by carefully measuring his food intake. However, Janus had altered his stomach’s ability to tell his brain that he is full. Competitive eaters must be fastidious about their diets for their entire lives — altered eating habits may increase obesity risks late in life, though this needs to be further studied.

There is also a risk of stretching the stomach so often that it fails to contract back to its usual size. This is a condition called gastroparesis, and its symptoms are constant nausea, indigestion and vomiting, according to the study in the American Journal of Roentgenology.

But, there is little risk of gastric perforation from local eating competitions, which often offer free food in exchange for a good show. Austin’s Old School Bar and Grill says that if a competitor can finish their 1 pound bacon, 1/2 pound cheese burger in less than 25 minutes, the burger’s on them. The restaurant Eat Ban Mi will give $50 and a picture on its wall to anyone who can eat 5 pounds of noodles and a gallon of broth.

UT students can use Austin speed-eating competitions as a fun way to win a bet but may want to exercise caution before entering the big leagues. The competitive eaters on television are professionals, and, like nearly all professional athletes, they may face long-term consequences to perfect their craft.