Side effects may include brainwashing: The cultural epidemic of Big Pharma’s direct-to-consumer advertising 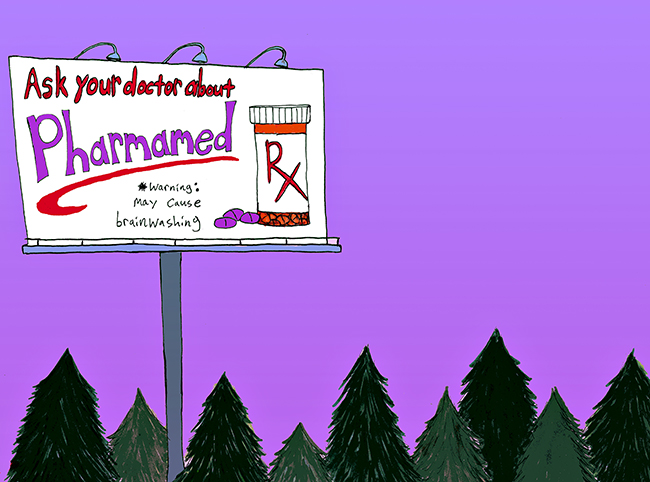 The typical American spends more time watching drug commercials than at the doctor’s office. We each sit through an average 16 hours of side effect recitations and increasingly comedic brand names each year. These stereotypically bland commercials for anything from antidepressants to antacids may seem harmless, but it would surprise many to know that some American medicines are banned by every country on Earth except the US and New Zealand. There is something wrong with the pharmaceutical advertising industry in America.

Until the late 1980s, drug advertising was highly regulated by the US Food and Drug Administration. The pharmaceutical industry, affectionately known as Big Pharma, had to list all side effects and associated risks for each drug. After the FDA relaxed their rules in 1999, however, Big Pharma only needed to hastily mutter a few of the “major” side effects at the end of the commercial, and the direct-to-consumer advertising frenzy had begun.

Big Pharma now spends over $4.5 billion per year influencing people to buy drugs. That number is recouped up to four times over in pure profit and will only grow as the pharmaceutical industry swells to an estimated $1.3 trillion by 2019.

This consumer advertising is deceptive and unethical. While Big Pharma may have the right to free enterprise, it spends too much money preying on the consumer, who has neither the education nor authority to prescribe the medications it hawks. But studies show that patients can influence their doctors to write unnecessary prescriptions, a fact that Big Pharma appreciates greatly.

Proponents say the advertising informs and empowers the consumer to learn about medicines that may be useful to them. But if a consumer were truly informed and empowered, they would not be so quick to jump on Big Pharma’s pill-popping bandwagon. The overwhelming majority of doctors think direct consumer advertising misleads patients, encourages drug overuse, increases the cost of healthcare and should be scaled back or banned.

With Big Pharma, doctors and the FDA all at fault; to whom shall we direct our valium-sedated outrage?

“I think the real problem lies with us—with you and with me,” says Chief Nursing Officer Rosemary Brown of Duke Raleigh Hospital. “We have become a nation that believes our health issues, our quality of life and even our happiness can be fixed with the swipe of a pen across a prescription pad.”

The pharmaceutical industry’s obligation to its shareholders has disguised itself as the public’s right to good health, and we let it. That we stomach slow-motion B-roll of a smiling middle-aged woman walking her dog while a tranquil narrator mentions her shiny new antidepressant might cause liver failure and suicidal thoughts is deeply disturbing and indicative of how far we have slipped into the “medicate first, ask questions later” mentality.

Feeling sad? Can’t get out of bed in the morning? Perhaps you don’t need Abilify. Perhaps you need a reality check. Sadness and fatigue are a universal part of the human experience, not necessarily symptoms of disease. We have forgotten that our first line of treatment should be changes to our behavior, not a fistful of pills. Sometimes the best medicines, like diet and exercise, cannot carry a brand name. Talk to your doctor about your issues with direct consumer advertising.