If Texas Athletics is the front door of the University, Steve Patterson is the doorman 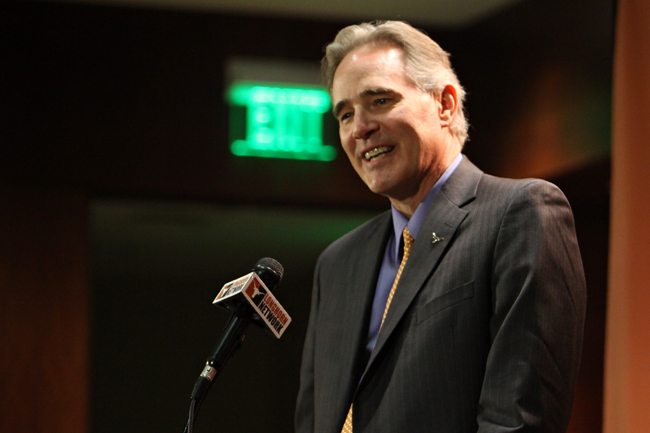 When head coach Charlie Strong assumed leadership of the football team last year, he made national headlines before the season even started. Strong’s five core values — honesty, treating women with respect, and no drugs, stealing or guns — generated support from coaches, fans and media outlets alike. He kicked straying starters off the team, settling for an abysmal 6-7 season from players who followed the rules. But in sending a message, he gained many fans’ respect.

Athletic director Steve Patterson needs to gain fans’ trust and respect as well. He faces tough business decisions and a bigger financial burden than athletics has seen lately, largely due to new coaching hires and staff changes. To counter the financial changes he must make to generate revenue, Patterson must build relationships with fans and remind them he values their support. As he and women’s athletic director Chris Plonsky told reporters Friday, they need to better communicate changes.

“Sometimes, we are moving as fast as we can to deal with the changing environment in college athletics,” Patterson said of the miscommunication. Plonsky agreed: “We blew it – collectively.”

It’s unclear what Texas considers its athletic directors’ primary responsibility — the business/operations side, or schmoozing fans to haul in donations. When asked for Patterson’s job description earlier this month, three different athletics officials told The Daily Texan they didn’t have one. The closest resource any offered was Steve Patterson’s biography. If this was to say that Texas hoped Patterson could reproduce his past successes, then university officials can’t look to his business mindset as a shortcoming.

Patterson’s financial demands are hefty: Texas now needs to put up an additional $5,750 per athlete to support cost of attendance this year ($1.5 million total). Add to this the athletics department generating a net loss of $8.1 million in 2013-14, its first season not breaking even since 1999-2000, and Patterson’s challenge continues to grow. An overview released by Texas Athletics last week spoke to this.

“The reality is, Texas Athletics does not have as much money as some think,” the report says. “Our two biggest revenue generators — tickets and donations — have remained flat over the past five years.”

The report responds to a June 18 long-form investigative piece by Horns Digest’s Chip Brown, in which Brown details Patterson’s shortcomings and the frustration of fans and donors in more than 5,000 words. Among the grievances, Patterson raised ticket prices, began charging ticket holders for parking and cracked down on faculty ticket benefits. His methodology isn’t popular with fans. The report spurred conversation that Patterson’s response to challenges are enough to talk of his firing. Even President Gregory Fenves acknowledged the concern.

“[I am] aware of the frustrations of some of our Longhorn fans,” Fenves said in a Wednesday statement, according to The Dallas Morning News. “Our athletic teams are the front door of the university and our fans are essential to our success.”

Patterson probably can’t please everyone if he tries, and as the “bad guy” in financial decisions, he’s sure to draw ire. One example: Through the school’s methodology of measuring ticket value, tickets rose an average of six percent heading into this season. But when calculating the total cost of tickets last year vs. this year, the raise equals 21.5 percent — coming off a losing season.

As numbers change and benefits reduce, it’s imperative for Patterson to keep his rapport with fans. Fans and donors come from the same lot, and as much as he needs to charge fans more, he also needs their support.

Further, as Fenves said this week, the athletics department is the “front door to the university.” As such, Patterson might as well be UT’s doorman. And when our doorman does not smile and greet visitors warmly? His guests aren’t as eager to come back for a visit.

Regardless of monetary complaints, the athletics department should never have come to the point where it is publicly known that “Steve Patterson has been told to change his personal style,” as The Dallas Morning News reported Thursday, attributing three different sources familiar with the process.

Following in DeLoss Dodds’ footsteps would be hard for any athletic director. Dodds had decades to build a relationship with donors, national championships and university growth in his tenure to reference. But even if Patterson can’t be Dodds from the start, he must be personable and approachable. If he can’t be, the university should restructure the department accordingly.

Entering the 2015 football season, fans — in their newly priced seats — will expect wins. And they should. Strong now has the chance to prove his football acumen, bring his team back to the talent level at which it once stood. Bringing home wins is no small order. But with his core values behind it, Strong has a head start in the hearts and minds of his fans.

Patterson, too, needs to secure this loyalty. And he needs to secure it now. Before he continues to change programs, ramp up costs and implement his vision of Texas athletics, he needs to consider fans' vision of him. Inside the stadium, the athletics department, the arenas, fans will cheer for their favorite Longhorns. But it’s time that excitement and comfort started at the door. It’s our doorman’s job.