Austinites march to Capitol in honor of Sandra Bland 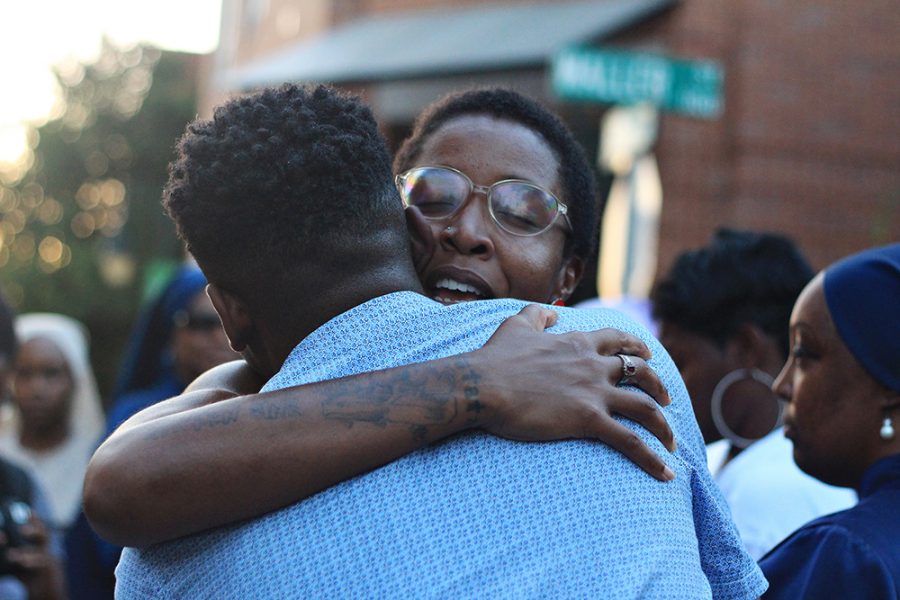 A crowd of about 300 people gathered at the steps of the Capitol on Thursday night to remember 28-year-old Sandra Bland, who was found dead in a Waller Creek County jail cell July 13.

The procession walked from Victory Grill on 11th Street to the Capitol in silence, a 20-minute walk that started as the sun went down and ended with a dark-blue night sky. People held signs with various messages, such as “Black Lives Matter” and “No Justice, No Peace.”

Fatima Mann, founder of Austin Justice Coalition, helped organize the demonstration. She said Bland’s mother asked her and everyone else to use social media as a tool and spread the hashtag #SandyStillSpeaks.

“I personally spoke to Sandy's mother,” Mann said. “She doesn't want any rioting. She wants us to be peaceful. We need to be peaceful until we can let them hear Sandy.”

Bland was arrested July 10 in Hempstead, Texas, on the charge of assaulting a police officer. Texas state trooper Brian Encinia, who arrested her, described Bland as “combative” in his arrest affidavit. The released video of Bland and Encinia’s interaction drew controversy not only for its content but also for alleged editing.

Three days later, she was found with a plastic bag noose around her neck. Her death was ruled a suicide, but CNN reported the jail violated policy in Bland’s case, including not checking on her for two hours.

Mann said the narrative surrounding Bland’s death is inaccurate because she was stronger than a three-day incarceration.

“Sandy told her mother she had a purpose and knew what it was,” Mann said. “She was a walking wall of light. … Let's stop saying it was suicide, and let's call it murder. We are not going to be happy until the officer is in handcuffs.”

Three police officers on motorcycles preceded the marchers, clearing a path. More officers in cars and on bikes waited on the sides, pausing traffic for the march.

Matt Fortes, a sergeant with the Austin Police Department, said the officers in attendance were there to assist the demonstrators.

“The organizer contacted the department, and we just facilitate their movement to express their constitutional rights,” Fortes said. “[We] protect them, yes. And shut down intersections and traffic. As they walk, we follow along. As they pass one intersection, we open it up.”

UT alumna Demitra Musgrove stood toward the front of the crowd with three friends. She was headed for Houston tomorrow for a Delta Sigma Theta national convention, she said, but wanted to make sure to stop by and participate in the vigil.

“Her life mattered and all black women and men’s lives matter,” Musgrove said. “We have to stop the police brutality on black people. … We want to see justice for the young lady found dead in her cell and for everyone else in the country victimized by police.”

After an hour of speaking, praying and making friends on the steps of the Capitol, Mann directed attendees to exchange contact information with each other and build their community. She also asked everyone to add their names to the police accountability organization People’s Task Force.

“If y'all want to do something, put your names on these lists [for People’s Task Force],” Mann said. “This is the introduction to the next step. Organize.”

Mann organized the rally with 11 other black women in the Austin area, according to 32-year-old Amber Watts. Watts and 26-year-old Wana Akpan also contributed their efforts toward organizing the rally.