Cautious optimism as the struggle with campus carry begins 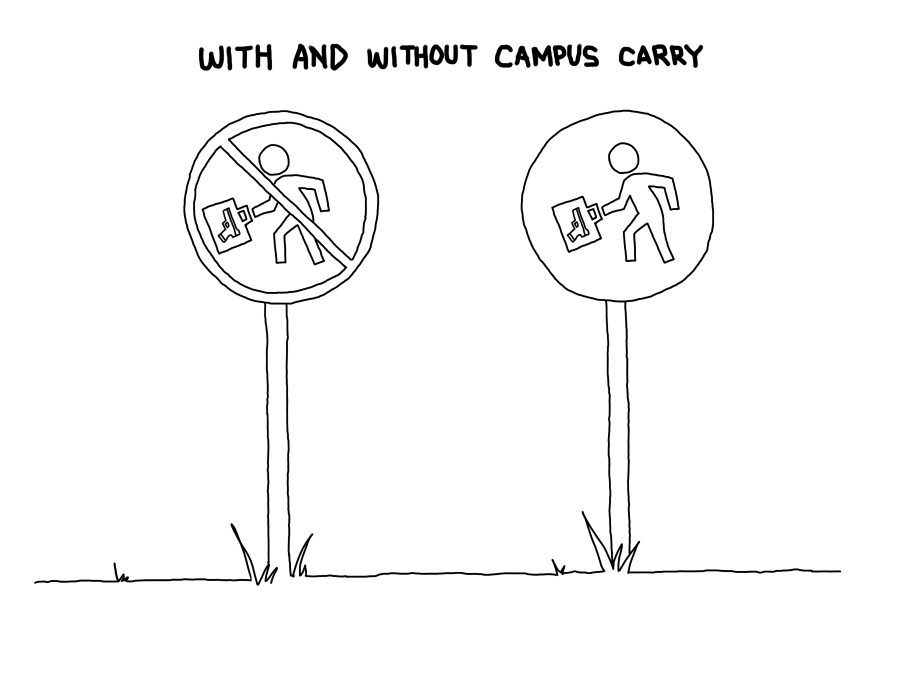 Ever since Texas Gov. Greg Abbott’s signed the campus carry bill into law in June, higher education institutions across the state have been grappling with how to deal with such a controversial new law. The University of Texas at Austin is no exception and is beginning to mobilize its efforts to create protocols as the upcoming school year draws near.

Senate Bill 11 will make concealed carry of handguns by licensed individuals legal on college campuses across the state at the beginning of the fall 2016 semester. Certain areas on campuses, however, will be exempt from this new law. In something of a reprieve, Texas lawmakers have allowed each university to draft protocols unique to its institution to ensure that the new carry laws tailor well to each campuses’ concerns. Open carry will not be legal on college campuses despite the separate bill taking effect at the same time.

UT-Austin President Greg Fenves will appoint a task force in the coming weeks to work with the University’s legal team, students, faculty and chancellor to create UT-Austin’s specific protocols. Fenves, as well as University System Chancellor William McRaven, have both been very clear that their primary objective for UT-Austin’s protocols will be to satisfy the law in full by considering individuals’ new rights, while doing as much as possible to defend safety and maintain comfort on campus.

The most important question that needs to be answered going into the campus carry protocol decisions at UT-Austin is, once the legal requirements of campus carry are satisfied, will carriers’ newfound rights eclipse a safe and comfortable campus environment for other students?

Despite the university-specific protocols and exempt areas of campus, it is worrisome that the new bill may seriously infringe on the University's learning environment. There are two distinct yet equally important areas of concern. The first, and most obvious, is campus safety. Rigorous debate about this issue surrounded the campus and open carry bills as they made their way through the Texas Legislature, with no clear winner emerging. This, however, is not my primary concern because of my confidence in the UT System and Austin administration.

Now, it is undeniable that a shooting, accidental or otherwise, on or near the UT-Austin campus may occur as a direct result of campus carry. But, I think the University’s protocols will do all in its realistic power to ensure that does not happen. In such a case, I think the legislators responsible for drafting and passing the bill will bear the entire burden of responsibility.

My primary concern is for the psychological damage done to the campus, students and employees. Anxiety about who is carrying concealed weapons will change the entire campus. This anxiety will linger in the minds of everyone on campus, adding a frightening end game to tense situations — say, a student heatedly speaking with a professor about a bad grade or a disgruntled employee. Even in less tense campus interactions, the threat from armed people doing harm — or from unintended fatal accidents — to others will be worryingly close to the minds of everyone. The United States’ notoriously high amount of mass shootings, especially by younger people in recent years, adds a distinctly haunting reality to this concern.

I believe that this issue will be the second most important, behind satisfying the law, in the minds of the task force, Fenves and McRaven. The comments of the latter two, McRaven especially, indicate a deep concern about losing such safety and comfort. McRaven’s vigilance on this front is excellent news for students because it will, hopefully, mean that the protocol does everything legally possible to guard those essential aspects of UT-Austin's success.

So, as Fenves announces his task force in the coming weeks and begins UT-Austin’s handling of this bill, I think students should feel cautiously optimistic. Make no mistake, I strongly disapprove of campus carry and would revoke it if I could, but I am confident that the UT administration has the capacity and proper objectives to ensure that campus safety and comfort emerge as unscathed as can be reasonably expected.