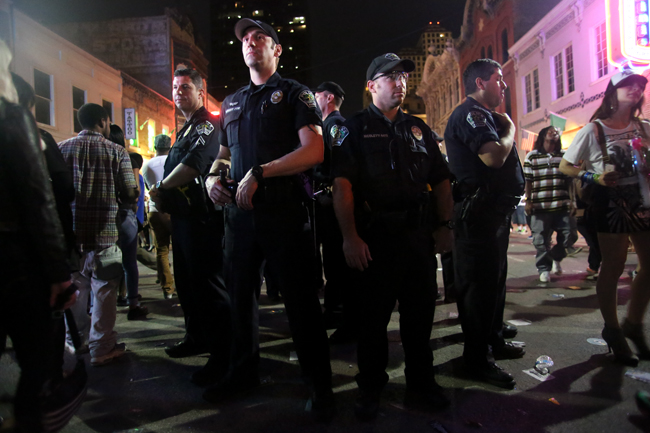 Austin police department officers form a human barricace down 6th street during the last Saturday of South By Southwest 2014. In order to ensure safety at future festivals, Austin City Council member Mike Martinez initiated a proposal to conduct an in-depth review regarding city safety and capacity during SXSW. " />

Austin police department officers form a human barricace down 6th street during the last Saturday of South By Southwest 2014. In order to ensure safety at future festivals, Austin City Council member Mike Martinez initiated a proposal to conduct an in-depth review regarding city safety and capacity during SXSW.

Within the next five years, the Austin Police Department plans to add 410 officers to increase its goal for more community engagement.

Announced July 19, this plan to add 82 police officers a year will be a 40 percent increase from the 59 officers added last year. Over the last five years, APD only added 177 policemen, with 64 of those officers brought on mid-year in 2011 and 2012.

Assistant Police Chief Troy Gay said the department has worked for more than a couple of years to improve its methods to staff more officers. Gay said the standard policy was a ratio of two officers per 1,000 citizens, but, going forward, ratios will no longer be used.

A 2012 report completed by the Police Executive Research Forum stated APD’s ratio can provide dependable increases in the police staff appropriate to the city’s population but does not provide “an objective assessment of policing needs in Austin.”

Based on the department's assessment, APD is also working to increase its amount of community engagement activities, Gay said.

“In our methodology, [we] looked at what the common practice is for a department that is community policing based,” Gay said. “Thirty to 50 percent is what we call community engagement time — when the officers are not on an emergency type call but working to build relationships within the community.”

Gay said APD’s community engagement is currently 13–14 percent. He said, for the department to reach the 30 percent mark, it will take five years to have the appropriate number of staff properly trained for the plan to be effective.

One example of this philosophy, Gay said, has been working on the Restore Rundberg project in North Austin. Gay said more officers on bikes, along with officers in squad cars, would be able to engage with the community and gather information to deal with the problems in the community.

Gay said the plan to add more officers this year would cost the City about $10 million dollars. While the plan still needs approval from the City, Gay said he expects it to pass.

“We just recently provided our justification for our budget to the city manager and staff,” Gay said. “This will be going towards council so this looks like the plan likely going forward.”

David Green, media relations manager for the City of Austin, said the budget department and the city manager will propose this budget to the Austin City Council on July 30. Once the plan has been presented to the council, more information will be released to the public.

Ora Houston, Austin City Council member for District 1, said she hopes to get some questions answered to have a better understanding of how community engagement will be handled going forward.

“We have talked about community policing for a long time,” Houston said. “We have already raised salaries and increased the number of people, but the majority of our police don’t even live in the city. You can’t do community policing while you are riding in your car … or going from call to call.”

Kenneth Casaday, APD detective and president of the Austin Police Association, said he does not expect to see any changes made in selecting officers and training them for duty.

On July 24, Police Chief Art Acevedo fired APD officer Vontrey Clark after he was involved in the murder of Kyle Police Department worker Samantha Dean. Regarding this incident, Casaday said the department will use it as a learning opportunity for the young officers.

“Going forward, APD will continue to hold more rigorous background checks and use this as a learning opportunity,” Casaday said. “We take every termination seriously, and we will use this to show younger officers going forward what they cannot do.”

Casaday said he is excited to see officers added, but there are still other departments that need a larger staff.