Since the Paramount Theatre welcomed its first audience in 1915, Austin has become home to many blockbuster movies, major production studios and award-winning filmmakers. A century later, though, the city’s film scene may be coming to a standstill.

In May, the Texas Legislature reached an agreement to provide the Texas Moving Image Industry Incentive Program with $32 million, a dramatic reduction compared to the $95 million awarded last session.

“It’s disappointing,” said Richard Linklater, Austin-based director and founder of the Austin Film Society. “Our program had really been successful, and we’ve all worked so hard to get it to this place. Then, in one session, [legislators] threaten the survival of it.” 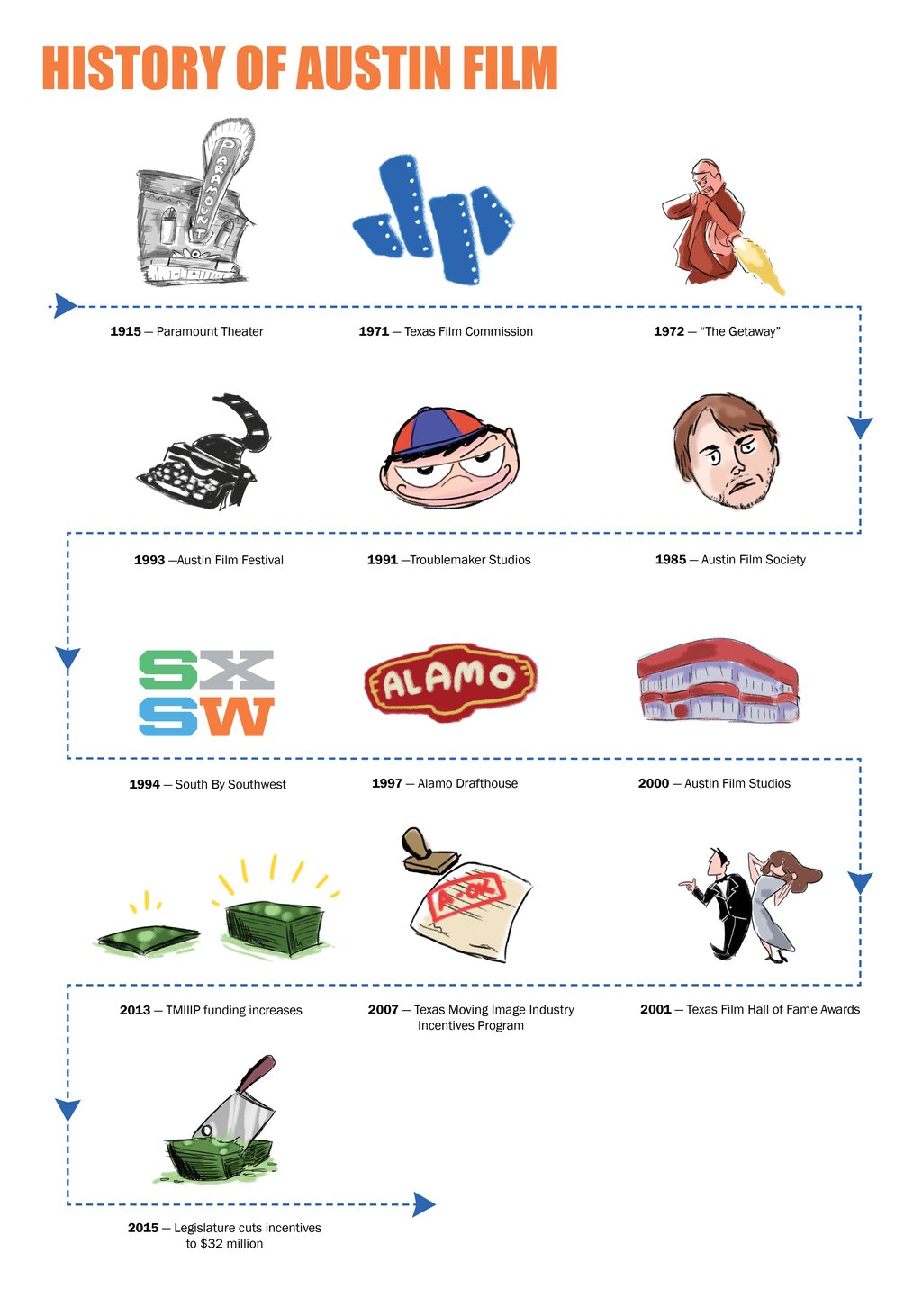 The program, established in 2007, allows the Texas Film Commission to administer grants to films, television programs, commercials and video games produced in state. Projects don’t receive funding before their completion. For a film to qualify, it must meet specific standards, such as shooting 60 percent of the film in Texas and having a crew made up of at least 70 percent Texas residents.

Legislators focused on cutting incentives across the board this session after last year’s release of The Texas State Auditor’s report. According to The Texas Tribune, the audit revealed “weak oversight policies, including more than $170 million awarded to recipients that never formally applied for the funds.”

Freshman state Rep. Matt Rinaldi (R-Irving), who proposed the budget amendment to defund the film subsidies, said in an email the incentive program is a bad use of taxpayer money. He said he hopes to use the funds for more pressing priorities, such as education and transportation.

“Allowing the government to pick winners and losers in the marketplace through targeted subsidies is anticompetitive and discriminates against small businesses,” Rinaldi said. “Also, the money does not come out of thin air. It comes from hard-working taxpayers.”

According to the Texas Association of Business, film incentives have directly and indirectly created more than $1.5 billion of the state’s economic activity despite allocating roughly $221 million for incentives since the program’s inception.

Mike Blizzard, president of the Austin Film Society, said there was a chance for healthy incentives, but discord between the different industries also created the opportunity for these subsidies to be cut.

“When you bring people here [for films], they’re renting hotel rooms, going out to eat and flying on planes,” Blizzard said. “They’re putting a lot of people to work and all those things bring a variety of economic benefits to the state, but some of these visual effects houses aren’t bringing the same level of activity.”

“Who it affects the most isn’t me or the famous actors — it’s the crews that work on movies, raise kids here and live here,” Linklater said. “Our industry is, by definition, freelance temp jobs. That’s what makes it vibrant. It’s just really disappointing when you’re so fundamentally misunderstood by lawmakers.”

After the legislature announced its decision on May 21, Scott Ricamore, Dallas-native and television series developer, created a Change.org petition asking Gov. Greg Abbott to call a special session to debate film incentives. Of the 10,000 signatures Ricamore requested, the petition currently has 9,339 supporters.

“A lot can be done between now and next session,” Ricamore said. “I want to provide jobs to my friends and people in the industry here. I don’t want to take [my work] to other states, but the financial reality is production companies don’t have a choice.”

To prepare for the next legislative session, Blizzard, Linklater and Ricamore said workers in the industry need to become more involved in the legislative process.

“The biggest hope is that we can get a decent level of incentives restored in the next legislative session,” Blizzard said. “That way, instead of an industry spiraling downward, this just becomes a little bump in the road.”