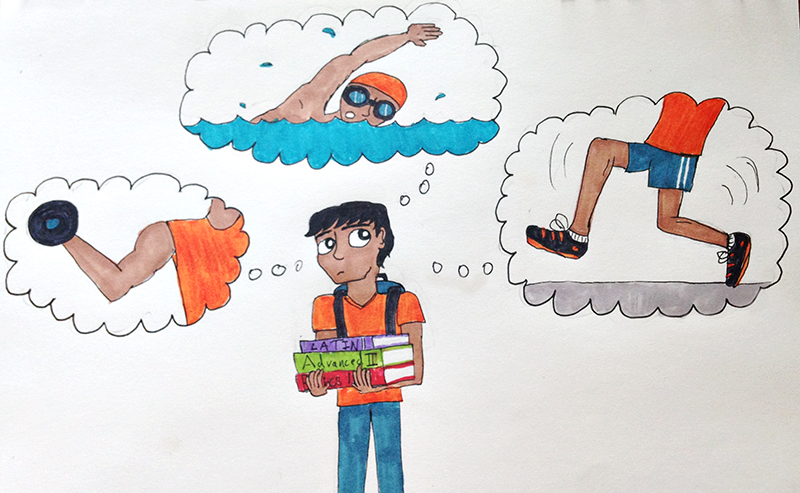 Scientists have shown exercise can help people avoid depression and live longer. However, students who are constantly at the gym may be experiencing fewer health benefits per hour than those who exercise at a more leisurely pace.

By building habits in college that stick through adulthood, students who exercise in college are more likely to lead healthier, happier and longer lives, according to a study in the Research Quarterly for Exercise and Sport. College is an important time for students to develop healthy routines, and students should know as much as possible about how to establish these habits.

Students could refer to the 2008 Physical Activity Guidelines for Americans, the first-ever government exercise recommendation, as a baseline for their research. These guidelines advise at least three hours a week of moderate exercise, such as brisk walking, or an hour and 15 minutes of vigorous exercise, such as running or jogging.

Researchers investigated whether health benefits per hour decrease as exercise increases, as well as whether people who exceed the government’s recommendations have negative health consequences. These researchers defined health benefits as a decreased risk of dying – not weight loss or a gain in muscle mass.

They found small amounts of exercise are better than none. According to a study in The Lancet, people who exercised 15 minutes a day, or an hour and a half a week, lived an average of three years longer than non-exercisers.

Students who balk at this time commitment may want to consider their twice-a-day commute from Hyde park, the four walks between less-than-efficiently spaced classrooms and the casual frisbee game after dinner. Moderate exercise adds up, especially with a few easy lifestyle choices that maximize exercise and enjoyment, such as riding a bike instead of a car to school.

Both this study and one in the Journal of Preventative Medicine did not find the point at which too much exercise caused people to have shorter lifespans. This research comes as a relief to marathoners and triathletes, who push their bodies to their limits.

Whether UT students decide to exercise for 14 minutes or four hours, research indicates there will be some benefit. Paying attention to the latest research, as well as to how their bodies feel, can help students live longer, healthier lives.