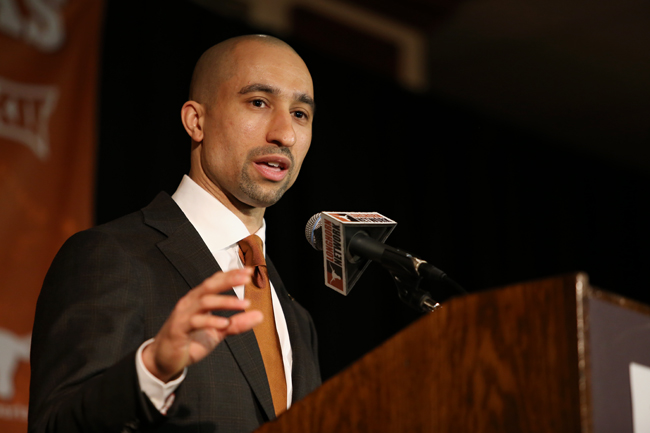 As summer ends and fall begins, another round of Texas sports will start. Here are a couple of things to look forward to this fall:

Head coach Charlie Strong sat dapper at Big 12 Media Day in Dallas and articulated what Texas fans hope to be true for the upcoming season.

“We have to have a winning season,” Strong said.

In his first season at Texas, Strong went a disappointing 7–6, and, in the Texas Bowl against Arkansas, the Longhorns received a 31–7 drubbing courtesy of the Razorbacks.

Can quarterbacks Tyrone Swoopes or Jerod Heard command Texas’ offense? Will the wide receivers prove to be play makers? Can Texas go back to being a
national contender?

The answers to those questions?

Only time will tell.

Smart replaces Rick Barnes after Barnes’ 17-year tenure at Texas came to an end in February.

Smart will try to incorporate the “havoc” system that catapulted his VCU teams to national contention and led them to the Final Four in 2011.

Texas loses last year’s Big 12 Freshman of the Year, Myles Turner, as the Indiana Pacers drafted him, and it loses former senior Jonathan Holmes after his graduation.

But, with Isaiah Taylor and most of last years team returning, and new recruits arriving, this could be an exciting year for Texas basketball as it looks to do what Smart does best:

Gregory Gym is no longer home to the iconic “pop” of Haley Eckerman’s serve or the emotional leadership of Khat Bell, but the Longhorns don’t expect a drop off from last year’s run to the Final Four.

Texas brings back all but three players from 2014, including senior outside hitter Amy Neal, who was second on the team with 22 aces, and sophomore Cat McCoy, who led the team with 394 digs in her first season on campus.

The Longhorns bring in the No. 2 recruiting class, according to PrepVolleyball.com, with five freshmen to replace the holes left by the departures. Texas also bring in All-American outside hitter Ebony Nwanebu, who transferred from USC and is eligible to play this season.

The Longhorns start their road back to the Final Four at home with matches against Rice, UC-Irvine and LSU on August 28–29.

Jordan Spieth has taken the year by storm.

From being the youngest golfer to win The Masters to setting records at the U.S. Open, Spieth almost won the first three legs of the grand slam for the first time since Ben Hogan in 1953.

Now, Spieth sets his eyes on the PGA Championship and a third major win. If he wins the PGA championship, he will be the first golfer to win three majors in one calender year since Tiger Woods in 2000 and only the third golfer to do so, along with Woods and Hogan.

The PGA Championships will take place from August 13–16.