Thomas is overcoming disappointing moment, stepping up as defensive leader 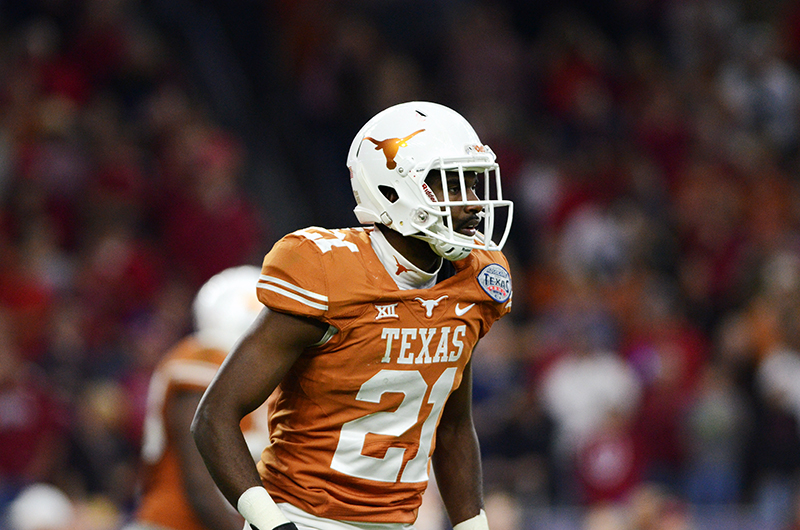 Duke Thomas doesn’t dwell on the moment, but he knows it as the most disappointing play of his collegiate career.

Thomas, a 5-foot-11, 178-pound senior cornerback from Killeen, Texas, didn’t think UCLA backup quarterback Jerry Neuheisel would throw a deep ball on him. But, with the Bruins deep in Texas territory late in last year’s game at AT&T Stadium in Arlington, wide receiver Jordan Payton blew past Thomas on a double move. Neuheisel would connect with the streaking Payton for the game-winning touchdown.

“I should not have let that happen,” Thomas said. “It doesn’t bother me to talk about it. Really, I learned from the experience. … It was really a dumb play I made. First of all, the coverage didn’t even call for me to take that route — I got too greedy. It was too greedy of a play. That’s what I learned — I need to just play within the defense.”

Despite his mistake against UCLA, Thomas still relishes in the spotlight. He likes to get passes thrown his way, as they’re a chance for him to make a play. Most importantly, Thomas’ most disappointing collegiate play taught him how to have a short memory.

“You have to have short memory, and that’s what [Thomas] realizes now, and he does have a short memory now,” head coach Charlie Strong said.

Nearly a year removed from the play, Thomas has put the play behind him and is ready to take over as the leader of the secondary. He may not be as loud as former cornerback Quandre Diggs, but he’s still willing to speak his mind. Thomas has played alongside NFL defensive backs Kenny Vaccaro and Carrington Byndom. He’s ready to take what he’s learned from his former teammates and apply it to the field.

“Sitting on the side of Carrington Byndom and guys like Quandre, it’s great to learn from them outside of the game atmosphere — just watching them practice and how their techniques are,” Thomas said. “It’s elevated my game.”

Thomas also considers himself of an old veteran as the only senior cornerback.

As a member of a senior class that hasn’t been a part of a double-digit win season in their Texas careers, Thomas is looking to get the Longhorns back to the top.

He added that Texas’ work ethic has to change if the Longhorns want to get back to winning championships. Thomas said it’s about the team’s chemistry: Guys buying into the program; guys playing for each other and playing for their coach.

As his senior season draws near, Thomas is owning up to his mistake against UCLA and moving past it as he steps into his role as the secondary’s leader.

“It’s over and done with — there’s no reason to continue to dwell on a play that happened a year ago,” Thomas said. “Bad things happen. You got to just move past it.