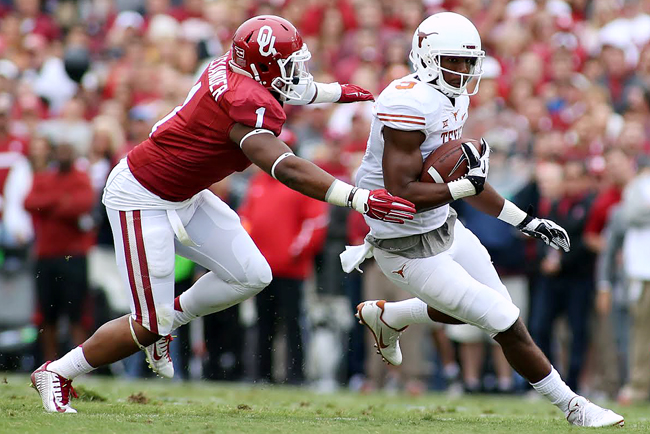 Sept. 5 at Notre Dame
This game will truly set the tone for Texas’ season. If Texas upsets Notre Dame — and it would be an upset, as the Fighting Irish slotted No. 11 in preseason rankings — then the Longhorns can ride the momentum through at least a few weeks. They face a dual-threat quarterback in Malik Zaire. But in the wake of quarterback Everett Golson’s transfer to Florida State, Zaire may be shaky as a starter. As Texas’ offense continues its learning curve, its defense better capitalize against a quarterback who’s completed 208 fewer passes in his college career than Tyrone Swoopes. Dylan Haines and Duke Thomas must latch onto receivers to reduce Zaire’s options. This game will also be a good time for highly touted freshman linebacker Malik Jefferson to make a strong debut.

Sept. 19 vs. University of California — Berkeley

Oct. 3 at TCU
Texas is at risk of entering this matchup with a false sense of security. Its three previous games feature both its easiest rivals of the season and the luxury of home-field advantage. Playing TCU — the No. 2 preseason team — at Fort Worth will require a whole new level of football. The Longhorns will face elite quarterback Trevone Boykin, named Big 12 preseason
offensive player of the year, and a team that’sw neither afraid to score nor to chase down the interceptions (TCU averaged 46.5 points per game last year and intercepted 26 passes). After last year’s 48-10 Thanksgiving drubbing, the Longhorns’ best bet is channeling that 2014 embarrassment into motivation to reclaim its statewide football name.

Oct. 10 Red River Rivalry vs. OU
Like the Longhorns, the Sooners haven’t settled their quarterback situation for this year. With redshirt junior Trevor Knight and Texas Tech transfer Baker Mayfield in contention, OU’s offensive production will depend on its ability to integrate a playmaker smoothly. Regardless, star running back Samaje Perine — who rushed for more than 1,500 yards last season, including a NCAA-record 427 vs. Kansas — can move the Sooners up the field. On defense, linebacker Eric Striker highlights the attack of a squad whose weakness is pass defense. But when it really comes down to it, the rivalry factors so heavily into this matchup that getting a strong start and excess enthusiasm is Texas’ best bet at the W.

Dec. 5 at Baylor
For the second time in three years, Texas ends its regular season with a Waco showdown against this year’s No. 4 preseason pick. The competition once had the potential to be a Big 12 title game, although TCU makes that less likely this year. Texas should expect a balanced offensive attack from the Bears. Returning junior running back Shock Linwood as well as receivers Corey Coleman and KD Cannon, Baylor can run the gamut with significant offensive flexibility. Its defense is less surefire but returns multiple recipients of conference and national accolades in 2014. Head coach Art Briles knows what he’s doing, and the Longhorns must be prepared to contend on the Bears’ home field. Then again, by this late in the season, Texas will need to have competed strongly until this point or the game won’t mean more than the difference between low-caliber bowl games.