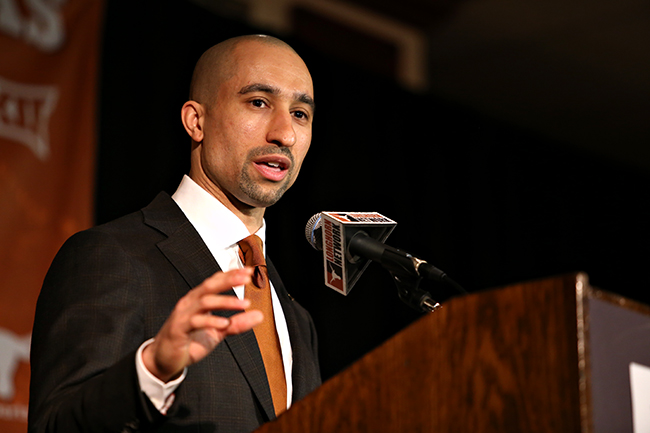 Over the offseason, the NCAA reduced the shot clock from its traditional 35 seconds to 30 seconds in an effort to improve the pace of play.

If new head coach Shaka Smart has his way, Texas fans won’t have to worry about the Longhorns ever getting a shot clock violation.

After making the move from Virginia Commonwealth, Smart wasted no time in Austin establishing his “Havoc”-style play, named for the way his teams hustle on offense and defense.

In an ESPN special that aired Aug. 11, Smart ran drill after drill, working players at full speed nearly all the time.

“It’s intense,” senior center Prince Ibeh said. “Once you get done with one thing, you move right on to the next.”

Intensity is a vital part of Smart’s up-tempo style of play on both ends of the court. At VCU, his “Havoc” approach  turned the Rams into a mid-major powerhouse.

During his six-year tenure in Richmond, Smart led the Rams to a 163–56 record and a spot in the 2011 Final Four, which included a 71–61 win over Kansas in the Elite Eight.

Even with all of that success, Smart’s move to Texas surprised many. Over the past few years, Smart turned down numerous offers to coach at bigger programs — most notably UCLA in 2013 — to stay at VCU.

The difference? The opportunities in Texas’ athletic department and its extensive talent, Smart said.

“When you add all those things together, you combine them with the community, to me, it was a no-brainer in a situation where I knew for my family and I, this was the place for us to be,” Smart said at his introductory press conference on April 3.

Smart enters his first season with about as talented a roster as he could have hoped. All but two players return from last year’s team, which qualified for the NCAA tournament. One player that figures to be a pivotal part of Smart’s system, guard Isaiah Taylor, returns for his junior year after reportedly contemplating entering the NBA draft.

Smart will benefit from a Longhorn team that has already proven to be a defensive power. Texas was second in the Big 12 in scoring defense, giving up only 60.3 points per game, and first in field goal percentage defense. Senior centers Cameron Ridley and Ibeh were third and sixth respectively in the conference in blocked shots.

But the real task for Smart and his coaching staff will be getting the offense on track. The Longhorns managed only 67.4 points per game­ ­— good enough for eighth in the conference — and made just 43 percent of their shots. Texas also had no top-ranked players in the conference in scoring or field goal percentage.

Smart sees the gaps. He said he’ll adjust his system for the players who are here to make the team highly competitive this year.