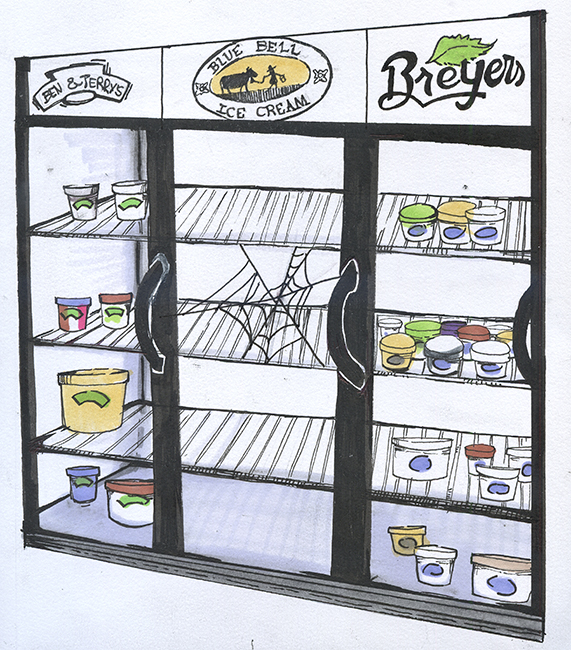 Although Blue Bell will return to certain stores around Texas and the U.S. on Aug. 31, the ice cream will not be coming back to the 40 Acres anytime soon, according to Rene Rodriguez, director of food service for the Division of Housing and Food Service.

After Blue Bell issued a recall of its products nationwide in April, followingthe discoery of a strain of listeria in its facilities. Rodriguez said he feared DHFS would not be compensated for all the ice cream they took off their shelves. Rodriguez later said DHFS would not do business with the company when their products would return for that reason.

Although DHFS was eventually compensated for all of the removed ice cream, because of an expansion in Blue Bell’s recall, Rodriguez said the likelihood of DHFS selling Blue Bell again is still low because there have not been any scheduled sit-downs with the company to talk about selling the ice cream again. Even if a meeting is scheduled, Rodriguez said DHFS will do what is best from a business perspective.

“I know that they’re reintroducing Blue Bell into this area, but as of now they haven’t requested a meeting with us to see what the options are,” Rodriguez said. “I’m just assuming that they’re going to focus on grocery stores first, the large vendors, the people who sell millions of dollars’ worth of their ice cream, but at this time they haven’t requested any time to revisit what options they have available with us.”

Although Blue Bell is a popular Texas ice cream, DHFS will not worry about ice cream sales since they have other brands replacing the treat, said Student Manager Savanna Scott.

“I don’t think it’s going to impact the stores too much because of the convenience of where we are located,” Scott said. “I think that we can still get by on Ben & Jerry’s and the other brands.”
Diana Deleon, freshman advertising major and a resident in Duren residence hall, said she has been following the comeback of Blue Bell since it was revived earlier in August and said other brands will not be able to replace her favorite flavor, Blue Bell Homemade Vanilla ice cream.

“I’ve kind of been really excited that Blue Bell’s been coming back, but now that I know that they’re not coming here it feels like they’re taking it away from me again,” Deleon said. “I’ll probably just stop buying ice cream if I’m being honest.”

Dylan Mowrey, business sophomore, said he thinks if other stores in Texas stock Blue Bell, DHFS should sell the ice cream on campus.

“I think it’s unfair as a Texan who’s grown up with Blue Bell,” Mowrey said. “I don’t think I can substitute another brand of ice cream with Blue Bell. I’ll probably just have some sort of candy bar and weep quietly in my dorm room.”