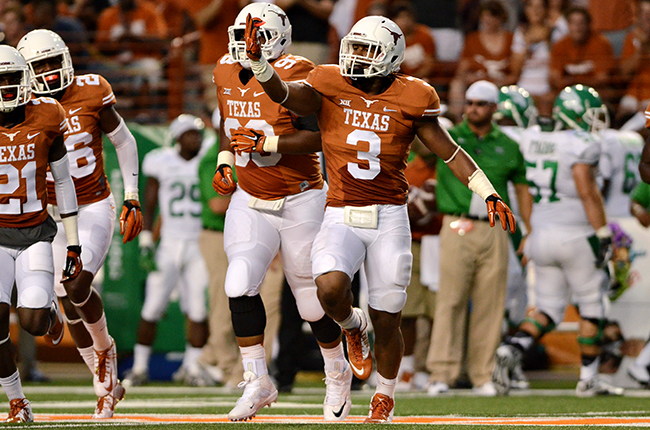 After a disappointing 2014 NFL Draft, in which the Longhorns went draftless, Texas had five players drafted and four sign free agent contracts this year. Here’s a look at the Longhorn rookies in the NFL.

Malcom Brown
Defensive tackle Malcom Brown decided to forego his senior season to go the NFL. He was drafted by the New England Patriots in the first round. He’s expected to fill the void of defensive tackle Vince Wilfork, who is now with Houston.

Brown recorded one tackle in the Patriots’ first preseason game, a 22–11 loss to Green Bay.

Jordan Hicks
Linebacker Jordan Hicks was drafted by the Philadelphia Eagles in the third round. He amassed two tackles in the Eagles’ preseason game against the Indianapolis Colts.

Mykkele Thompson
Safety/cornerback Mykkele Thompson was drafted in the fifth round by the New York Giants in the 2015 draft. Thompson’s rookie season was cut short when he tore his Achilles during the Giants’ first preseason game.

Quandre Diggs
The voice of last year’s Texas team, cornerback Quandre Diggs was drafted in the sixth round by the Detroit Lions. He was in the Lions’ first preseason game for 14 plays. Diggs didn’t record a tackle, but he was able to defend one pass.

Geoff Swaim
The Dallas Cowboys had depth at the tight end position entering the 2015 NFL Draft, which made the team’s decision to draft Geoff Swaim in the seventh round a surprise.

Swaim has taken advantage of his opportunity with the Cowboys, catching two passes in their 17–7 loss to the San Diego Chargers.

Jaxon Shipley
Wide receiver Jaxon Shipley went undrafted, but he signed with the Arizona Cardinals as an undrafted free agent. Shipley had a good performance during the Cardinals’ opening preseason game against the Kansas City Chiefs. He returned four kickoffs for 34 yards in Arizona’s 34–19 loss to Kansas City. Shipley caught one pass for 21 yards.

Cedric Reed
Defensive end Cedric Reed went undrafted in the 2015 NFL Draft but signed with the Buffalo Bills as a free agent. Reed didn’t play in the Bills’ opening preseason game, but he recorded three tackles against the Redskins in Buffalo’s second
preseason game.

Malcolm Brown
Running back Malcolm Brown didn’t get drafted but was signed by the St. Louis Rams as a free agent. He recorded 18 rushing yards on two carries and seven yards on one reception in the Rams' preseason game against the Oakland Raiders.

Nate Boyer
Long snapper Nate Boyer was signed by the Seattle Seahawks. He played, during the Seahawks 22–20 preseason loss against the Denver Broncos, but he was released by Seattle on Aug. 18.