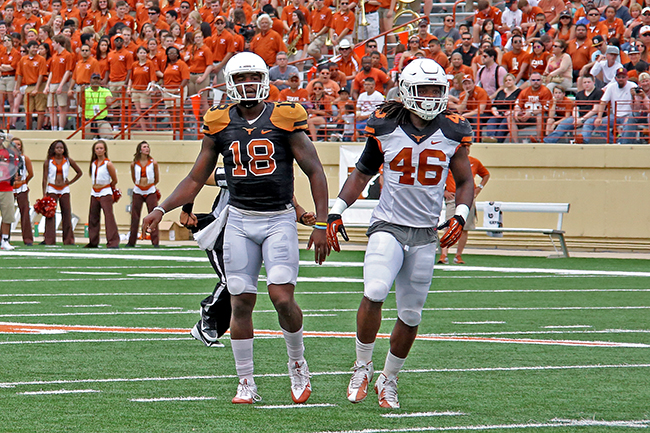 Considering everything head coach Charlie Strong has accomplished in his first year at Texas, his biggest victory may have been recruiting freshman linebacker Malik Jefferson.

Coming out of Poteet High School in Mesquite, Texas, as the state’s top player and the nation’s No. 10 recruit, according to 247Sports, Jefferson joins the Longhorns carrying lofty expectations. While any immediate contribution will help the team, he has the talent to be a true impact player from day one.

After committing to the Longhorns last December, Jefferson, eager to jump-start his career at Texas, arrived on campus in January to participate in spring practices. Like most freshmen, he initially struggled to learn his position in a new scheme. Despite early difficulties, he stole the show with a huge performance during the Orange-White scrimmage, in which he forced a fumble, broke up a pass and made six tackles, including one for a loss.

“Whenever you seen an athlete like Malik come in as a freshman, you always know he’s going to have a few hiccups here and there, but he always makes up for it in speed, and he’s always going to the ball,” Strong said after the Orange-White scrimmage. “He may not do it exactly the right way, but he’s going to be there to make the play.”

Now, with a semester of experience and an offseason behind him, Jefferson is emerging as a leader in the locker room.

“I think [participating in spring play] separated me a lot from my freshman class,” Jefferson said. “Those guys look up to me every day and ask me questions, [and] I try to help them with what to do and what not to do.”

The Longhorns need Jefferson to lead, both in the locker room and on the field. After losing six defensive starters, including top linebackers Jordan Hicks and Steve Edmond, this offseason, the Longhorns will have to fill several holes, especially at the linebacker spot. Now, despite never playing in a regular-season game, Jefferson is already a prime candidate to fill that void.

This offseason, Jefferson has done everything he can to prepare himself, including putting on 20 pounds to help him play the inside linebacker spot. While both Strong and defensive coordinator Vance Bedford pointed to Jefferson as an immediate contributor, they still need to factor in his inexperience. He will make his share of plays for the Longhorns this season, but they won’t come without growing pains.

“It’s a learning curve for him right now. He doesn’t know what he doesn’t know,” Strong said. “Right now, people have him on such a high pedestal, and he hasn’t played a single down of Division I football.”

Jefferson is certainly a player to watch in Texas’ upcoming season, but his growth carries bigger implications. As Strong’s highest-ranked recruit — and likely the freshman with the highest ceiling — he has a legitimate chance to become the face of Texas’ new football era over time.

“I’m ready to go out there and ball and do what I’m supposed to do because that’s what Coach wants,” Jefferson said. “We’ll put in the effort to do everything we can to get ourselves back on the map and put the ‘T’ in Texas.”