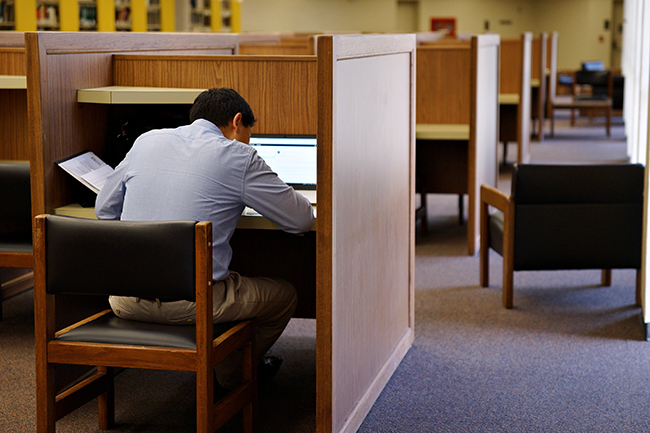 Starting Wednesday, the Perry-Castañeda Library will begin opening its doors 24 hours a day, five days a week, because of popular demand from students.

Lorraine Haricombe, UT’s new vice provost and director of directory of libraries, said she saw the need for extended hours in her mission to do things differently at UT, UT Libraries Communications Director Travis Willmann said, and so far the reactions have been positive.

PCL hours varied during previous semesters, and it only stayed open 24 hours a day near exam times, according to Willmann. The Flawn Academic Center also implemented a “24/5” schedule in January.

“We’ve had a lot of input from students saying that they wished that this had happened earlier,” Willmann said. “The reaction from the students to the new FAC extended hours was very positive, and we are seeing the same positivity towards the new PCL extended hours. It only follows that as students become more acclimated to using libraries, and libraries become a more collaborative area where they can study, that they’re going to want longer hours.”

Studio art senior Lynell Lewis said students will be receptive to the new hours because of the lack of open study areas available late at night.

“It’s good to have the environment available as a student,” Lewis said. “I just want to come here and relax and do my drawings and work, and I know that the PCL is open, so I can just use this area. It’s not as if the previous hours hindered me from being a success, but I just feel like them opening it up is making it more available, which makes the struggle easier.”

Computer science sophomore Shelby McGarrah said she thinks the new schedule will encourage students to study more and will be more convenient for students with unconventional schedules.

“I’m sure I probably will utilize the new library hours — unfortunately,” McGarrah said. “I assume there’d be more times earlier in the semester when you have to study longer hours, or for students who start getting jobs who need to come study much earlier in the morning [to accommodate] those types of strenuous circumstances.”

Although the PCL schedule could change in the future, a 24/5 schedule best serves the needs of students for now, Willmann said.