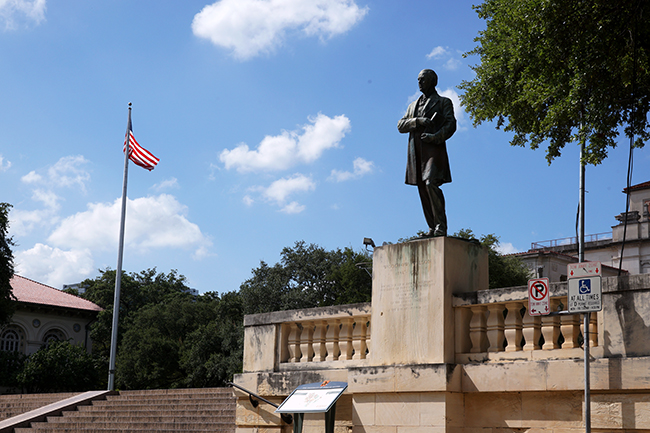 In February 1946, Thelophius Painter, the University’s 13th president, wrote a letter to Attorney General Grover Sellers regarding the graduate law school application of Heman Marion Sweatt. In the letter, Painter said, “This applicant is a citizen of Texas and duly qualified for admission […] except for the fact that he is a negro." The rejection of Sweatt’s application led to the crucial, yet frequently forgotten, Sweatt v. Painter Supreme Court decision, ruling in Sweatt’s favor. This case, preceding Brown v. Board of Education, contributed to and forever changed the racial landscape of public education in the United States.

Almost seventy years later, black students are still fighting to be heard by University administration. Among the criticisms are low black student enrollment and outreach, an insufficient amount black faculty, minimal representation of ethnic minorities and a lack of protection for people of color from hostility.

In what seemed like a rare victory for UT’s black community, President Fenves announced his decision to remove the statue of Jefferson Davis on August 13, while leaving the other three Confederate statues because of their “deep ties to Texas.”

The Confederate mens’ historical ties do not change the fact they fought alongside an army dedicated to maintaining black peoples’ proprietary status. Removing hateful, threatening symbols is not analogous to increasing black representation. Tangible recognition of Sweatt, a longhorn who played a role in changing the nation’s history, is almost nonexistent. If Fenves is to show his decision is more than a compromise, and that he is dedicated to establishing a safe and comfortable environment for black students, he must erect a statue of Heman Sweatt in Davis’s place.

Establishing a statue of Sweatt is not an outlandish demand. The statues of Barbara Jordan and Cesar Chavez, unveiled in 2009 and 2007, respectively, were created by an SG referendum. The legislation directed $1 of tuition per semester to the statues’ creation, from 2003 to 2007. Each statue cost $400,000. Similar student activism can repeat this victory for people of color.

“It’s our job as Student Government to represent the desires of students,” Xavier Rotnofsky, Student Body President, said. “The [Jordan and Chavez] statues are now on campus because of students — I can see a similar thing unfolding for a statue of Heman Sweatt.”

Symbols of representation can be the catalyst to changing a culture which erases and silences voices of color. The entire UT community has benefited from Sweatt’s sacrifice, Richard Reddick, Faculty Director for Campus Diversity Initiatives, said, and he said he believes the push for a monument in his honor must be a multifaceted effort.

Black students expressed at the Task Force’s open forums it is emotionally exhausting to exist in a space filled with relics honoring white supremacist history, while only being 4 percent of the student population.

Heman Sweatt never graduated from the University of Texas. His family stated his battle to be accepted into the University painfully damaged his health and relationships. Sweatt entered the lawsuit as an act of resistance. Sacrifice is not beautiful, but survival is. Students of color are in a perpetual battle to feel safe in the institutions they pay to attend. There is endless work needing to be done before this campus becomes welcoming to all students. The establishment of this statue will help Fenves show the black students of UT he is more dedicated to their empowerment than his compromise suggests.