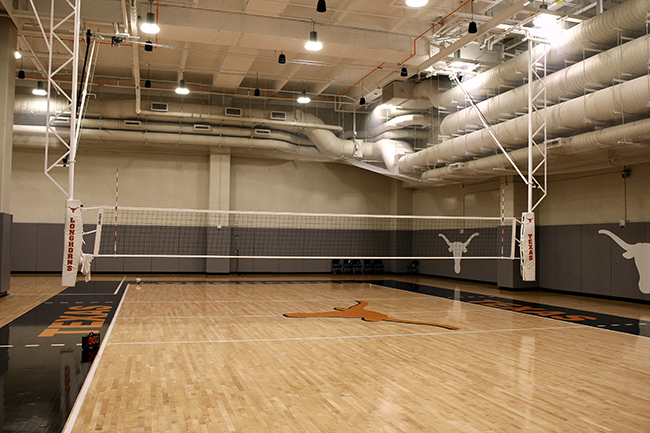 What can one get for $9 million?

For Texas volleyball, the answer is a new practice facility, located inside Darrell K Royal-Texas Memorial Stadium near the North End Zone entrance.

Equipped with a full-length practice court, multiple film rooms and a revamped locker room, the Longhorns now boast one of the top training facilities in the nation, on par with perennial contenders Penn State and Nebraska.

The plan to build the facility came after the 2012 season when, after winning the national championship, head coach Jerritt Elliott was approached by the University with an offer to build the team a new facility away from Gregory Gym and in an available space at DKR.

“I didn’t know this was going to happen until we won the national championship [in 2012],” Elliott said. “It’s nice because Gregory Gym is great, but this provides us with our own space to practice and spend time together as a team.”

The new facility acts as a one-stop shop for all of Texas volleyball, providing players and coaches with amenities for practice and training, but also for studying, eating and spending time together. For a roster that used to be splintered throughout campus except for during practice at Gregory, team members say they are already appreciating spending time together at the new facility.

“It’s been really nice to be able to eat and study together as a team as well as practice together,” junior middle blocker Chiaka Ogbogu said. “We’re really blessed to have so many people who support us and donors and all of those people who can make
it possible.”

In addition to the benefits the facility provides to the current Texas roster, the new practice center gives Texas a recruiting advantage throughout the Big 12. For a team that consistently recruits the top players in the country — including current freshman and top five national recruit Micaya White — the new practice facility only adds to the cache of the Texas program.

“It’s a wonderful thing to have for our program,” Elliott said. “We have academics there, we have our training table there, we have our weight room there, and now we have our ball facilities there. When you look at the tradition this program has and the success we’ve had, this facility is just another great reason to come to Texas.”

Despite the Longhorns’ move from Gregory for practices and other team-oriented activities, the team will still use the gym for home matches, where they boast a 322–51 record. According to Elliott, the team will spend a majority of their time at the new facility, but practice at Gregory the day before matches in order to get a feel for the court.

For the No. 3 team in the country in preseason polls, expectations are high. But with a new practice facility comes a new focus, and the Longhorns are ready to take on the challenge of reaching their fourth consecutive Final Four.