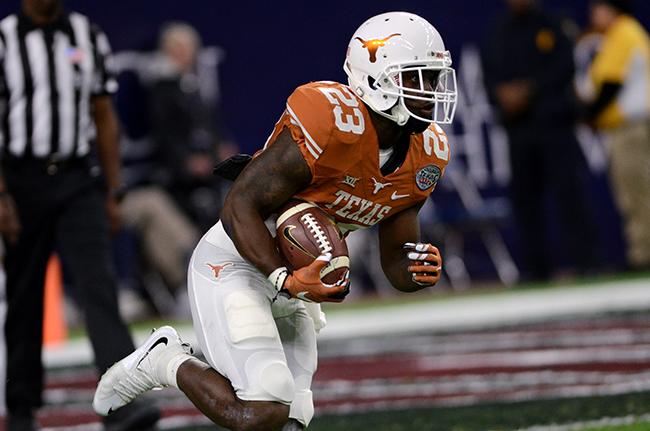 Senior wide receiver Daje Johnson might be Texas’ biggest offense weapon, but he hasn’t let himself show it yet.

An 84-yard touchdown run on the first play of the game against Baylor in 2012 and an 85-yard punt return against Oklahoma in 2013 show Johnson’s potential. But multiple suspensions have clouded his past.

Johnson, a speedster from Pflugerville, was suspended his first game as a Longhorn for a violation of team rules. His second violation warranted a game suspension during his sophomore season. Johnson missed Texas’ matchup with Oregon in the 2013 Alamo Bowl after being ruled academically ineligible.

“Freshman and sophomore year, [Johnson] was getting into trouble and we needed him,” senior running back Johnathan Gray said. “Daje is a great football player. When he’s healthy and at his peak, he’s an unbelievable player.”

When head coach Charlie Strong arrived at Texas, Johnson was one of the first players Strong approached. On the first day on the job, Strong ripped into Johnson. He told Johnson that missing a game should never happen again.

It didn’t work. As the Longhorns took the field in 2014, Johnson was suspended again. Despite kicking nine players off the team last year, Strong gave Johnson a final chance. Despite a hiccup with an ill-famed rap single “Dealer,” – which was mired in controversy because of drug-related lyrics — the coaching staff sees a newfound player in Johnson.

“Daje has come a million miles,” Strong said. “I look back a year ago and he was suspended the first half of the season and then he’s gotten it together.”

After Strong took a chance on him, Johnson wants to prove that he was worth the investment.

“I feel like [Strong] kind of sees the character within me,” Johnson said. “He feels like that’s not the guy that he is in the past doing all that stuff. I guess he sees much more in me. Player-wise and off the field, I feel like he sees way more in me to be the person that I can be.”

As his final season as a Longhorn approaches, Johnson says he’s more mature. His teammates notice the extra work he puts in.

“Daje, he’s definitely had his mishaps,” senior cornerback Duke Thomas said. “He’s messed up with some mistakes every now and then. [But] Daje definitely is changing. … He’s definitely grown. He’s definitely become more a leader for the wide receivers in that room with him and Marcus [Johnson]. He’s just making things happen for himself.”

In his last year in the burnt orange and white, Johnson touts lofty goals. He wants to be the player who reaches his potential. He wants to show he’s the Longhorns’ biggest offensive threat.

Johnson’s career hasn’t reached his expectations. But with Strong and the coaching staff behind him, he’s poised for a breakout senior season.

“There’s a lot of people pulling for me and I just want to prove them right,” Johnson said. “I don’t want to go out like ‘what if’ or ‘he could’ve done this.’ I’m trying to be remembered. … I am worth the investment.”