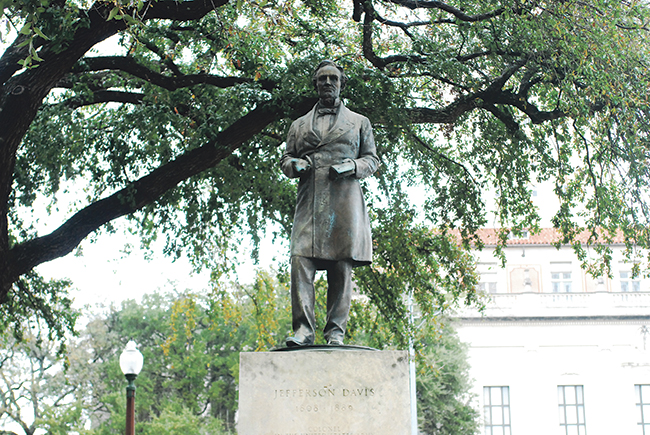 Although President Gregory Fenves made the decision to remove the Jefferson Davis statue from its place on the Main Mall, it was still present last night for “Gone To Texas,” a University tradition that welcomes incoming students in front of the Tower. However, a temporary restraining order requested by the Sons of Confederate Veterans stalled the removal and left the statue looming over the new students the night before their first day of class.

This is a consequence of the university administration’s continual complacency and lackluster approach to the call for removal of the statue that it will have to take responsibility for.

One of the driving contentions of the movement to remove the Davis statue was the threatening climate its presence created, primarily for black students, at some of the University’s most cherished traditions, like Gone to Texas and graduation commencement. These are two of the most sacred University rituals, representing the introduction and conclusion of UT students’ careers. Students were welcomed last night under the same hostility.

The obstacle presented by the Sons of Confederate Veterans is not an excuse for the administration’s failure to welcome the next generation of black Longhorns under more comfortable circumstances. The call for removal has been gaining momentum since March. Fenves did not appoint a task force until the end of June. The first forums did not begin until July. Fenves made his decision in mid-August. This excruciating lethargy does not exhibit thoroughness, but rather apathy.

The administration’s lack of urgency has compromised an opportunity to establish trust between the university and its students.

Allowing the statue to be present for Gone to Texas is a victory for the Sons of Confederate Veterans, effectively yielded by the administration. We understand the University’s hesitance to remove the statue while the lawsuit is awaiting trial. The fault exists in the fact the administration did not account for this type of delay, thus allowing the controversy to spill into the start of the school year.

Students were inaugurated to the university last night underneath the eyes of Jefferson Davis, despite almost five months of student legislation, protest, forum and dialogue. The statue’s prolonged presence does not inspire confidence in students of color that the university takes their grievances seriously. To prove to these students their concerns are valid, the administration must approach their mobilization with the same care as they would all other campus affairs.