For Nwanebu, transfer to Texas brings confidence heading into 2015 season 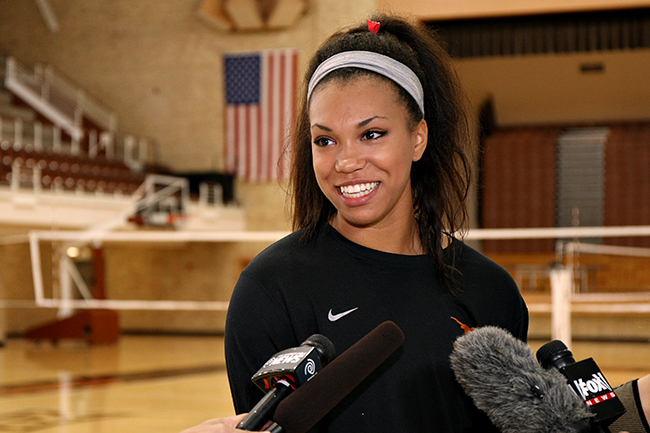 After reaching the Final Four the last three seasons, Texas looks to live up to high expectations once again and contend for a national championship.

The Longhorns lost two-time All-American Haley Eckerman to graduation following the 2014 season but reloaded coming into 2015. Part of that reload comes in the form of Ebony Nwanebu, a junior transfer student from the University of Southern California.

Highly recruited out of high school, Nwanebu was met with lofty expectations for her freshman year as an opposite hitter for the Trojans. A native of Fairview, Texas, Nwanebu was named the Mizuno/“Volleyball Magazine” High School Player of the Year in 2012 and was selected to the Under Armour All-American team.

Nwanebu lived up to the hype during the 2013 season as she raked in numerous postseason awards, including recognition as the AVCA National Freshman of the Year and a spot on the AVCA All-America First Team. In addition to leading the Trojans with 3.47 kills per set and a .358 hitting percentage during the 2013 season, Nwanebu shined on the right side of the court. She proved to be one of the premier offensive players in the Pac-12 and the nation.

“She brings a whole lot of game to our team and gives us different balance,” head coach Jerritt Elliott said. “When she’s hot, she can be overwhelming. She’s capable of adding that balance and something that we’ve really needed over there consistently.”

Following a disappointing 2014 campaign with the Trojans, Nwanebu decided to join the Longhorns. For Nwanebu, a return to Texas meant a return to her home and a more comfortable lifestyle.

“I just missed the state,” Nwanebu said. “I missed my family. I didn’t really fit into the LA culture. I’m more of a Texas girl, so it’s nice to be back here.”

Nwanebu joins a roster full of marquee players, including Big 12 Preseason Player of the Year, Chiaka Ogbogu, and Big 12 Preseason First Team member Molly McCage. For Nwanebu, playing with such established players will help her shoulder the load offensively and allow her to move more freely throughout the court.

“The whole team is really good at what we do, and we’re all focused on doing our own individual jobs,” Nwanebu said. “The pressure is on each of us equally. There was a little more pressure on me personally at USC.”

Following three consecutive Final Four appearances and a No. 3 ranking in the preseason polls, it seems to be championship or bust in Austin. To many, the expectations placed upon this Texas team may be daunting — but not to Nwanebu.

“I’m really excited,” Nwanebu said. “I’m excited to be part of this and be playing in my state and see where we can go.”