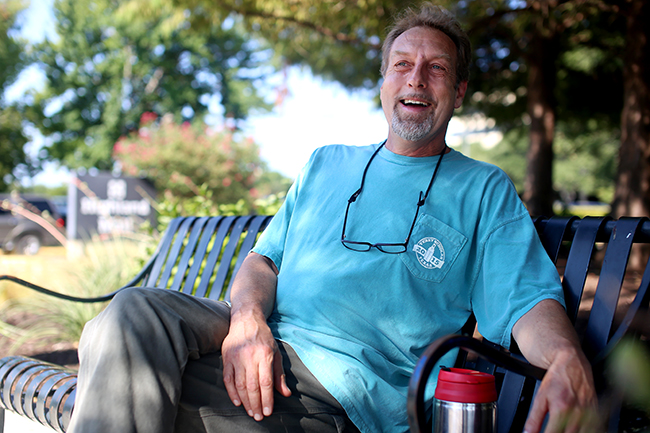 Fifty-three-year-old English junior Barry Maxwell sits down in his home and spreads out a stack of old receipts, police-issued tickets and notes. He hopes to piece together the chronology of the last seven years of his life — years muddled with alcoholism, drug abuse and homelessness.

Today Maxwell is far-removed from his time spent as a homeless man — or as he jokingly called himself, a “residentially challenged” man. He has a home, is four years sober and teaches a creative writing class, called Street Lit, to homeless individuals at the same shelter he once frequented.

Every Friday at 3 p.m., members of the Austin Resource Center for the Homeless (ARCH), a shelter that provides individuals without homes basic services and care, file into a classroom ready to share and discuss their recent work.

The idea for the writing class came from Maxwell’s personal experiences being homeless. Evicted in early 2008, he found himself crashing in jail cells, a storage unit on Lake Travis and at the ARCH.

“Finding myself in line to get into the ARCH was [a] total culture shock,” Maxwell said. “I felt like a target — like in the movies when the weak guy walks into prison and feels like everyone is a predator ready to pounce. It took me a long time to talk to people and realize that not everybody is waiting to kill me.”

After a year at the ARCH, Maxwell checked himself into rehab and has been sober ever since. From rehab, he moved into free temporary housing, got his GED and enrolled in Austin Community College, where he earned his associates degree before transferring to UT.

“I ended up being the valedictorian of the GED crowd that year, which surprised the hell out of me,” Maxwell said.

At ACC, Maxwell started a book collection drive for the ARCH. Over time, the book drive, also called Street Lit, expanded to include the creative writing courses. Maxwell said having a book to read during his time at the ARCH kept him from feeling lost.

“Imagine a world without TV, without a book to read, plus everybody gives you the stink eye whenever you’re just walking down the street,” Maxwell said. “Having a nice novel to escape into is a wonderful thing.”

Hannah Ford, volunteer and communications coordinator at the ARCH, said Street Lit is filling a very important niche for the members of the ARCH.

“The fact that these folks are coming every week and even writing outside of the group speaks volumes as to the value that this program is bringing to our clients,” Ford said.

This past Friday, an older gentleman volunteered to share his work. The man, blind for 11 years, recited two original poems — one darker, one a love poem — entirely from memory, leaving everyone in the room speechless.

W. Joe Hoppe, poet and professor at Austin Community College, guest lectured at last week’s workshop. He said he was surprised at the high level of creativity and articulation the group had.

Maxwell said the ultimate goal of Street Lit is to help the people of the ARCH connect and express their thoughts and feelings. He believes that doing so inspires confidence, which has the potential to positively affect every aspect of their lives.

“I would not dare to say I am the catalyst,” Maxwell said. “But if I can help someone find their own catalyst or realize the value of it, then that’s just awesome.”