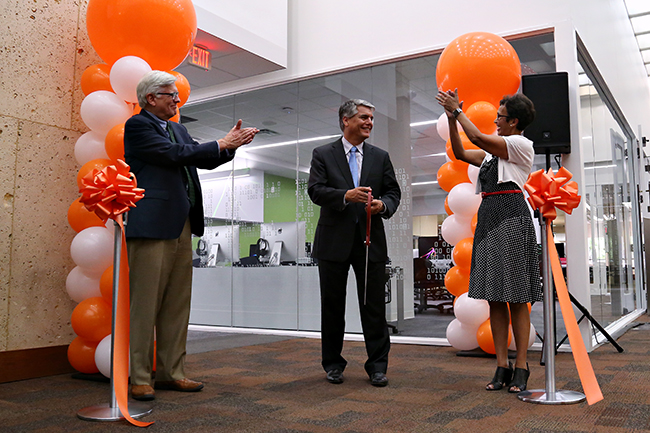 A new Library Learning Commons in the Perry-Castañeda Library was revealed to the public in an open house Tuesday.

The new Learning Commons will house the University Writing Center, five new learning labs and about 90 graduate and undergraduate employees. The 20,000-square-foot makeover to the ground floor is the largest renovation to the building since the library’s opening in 1977, according to Travis Willmann, communications officer at the vice provost’s office.

“The hope is that we’re adapting library thinking from a traditional model, which is libraries as a book warehouse, to community centers and centers for learning, which is more of a 21st century model,” Willmann said. “We hope that students can get the help they need in one place and be better at what
they’re doing.”

The $4.5 million rennovation is funded by the Office of the Provost, the College of Liberal Arts and UT Libraries. UT President Gregory Fenves said he is excited about the improvement and hopes the new collaborative space will better serve students in a time where the concept of a library is undergoing a lot
of change.

“So much of the information and knowledge that students learn and need to have is available online, but not everything,” Fenves said. “People aren’t available online. That’s really what the Learning Common is — to bring together the tremendous resources of the University libraries in the collections, but also in the people and in the support services that help students succeed.”

State-of-the-art equipment is one reason students should be excited about the Learning Commons, journalism senior Nate Jackson said. Jackson was one of the first students to use the learning lab to work on a multimedia assignment, which was presented at the open house.

“It has all updated programs that I need, like Adobe Premiere, Adobe After Effects, all Adobe creative suites (sic), and they have all the media software and big, nice computers,” Jackson said. “Being able to go any time the PCL is open and having this software available works really well for me because I can’t afford this computer software on my own.”

Although the Learning Commons is a large-scale renovation to the PCL, it is only phase one of the project, according to Willmann.

“The idea is to convert the entire ground floor, at some point, into a learning center that serves all the needs of students on campus,” Willmann said.

The Learning Commons will be open to students 24 hours a day, five days a week starting on the first day classes begin.