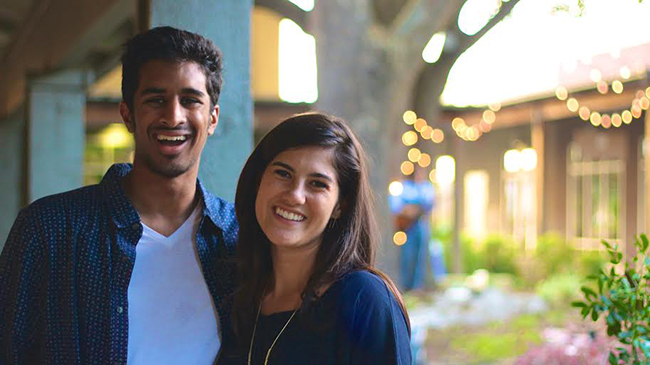 Early last year, the pair began work on planning a series of intimate performances staged around Austin that would help local musicians contribute to a charity they’re passionate about. In July, the duo launched a Kickstarter campaign to help fund their project. With three weeks left, Social Sessions’ founders have raised a third of their goal.

After deciding on a charity, the Social Sessions team will campaign around the city for a month, raising money and awareness for the musician’s cause of choice. At the end of the campaign, fans can pay $25 for access to an exclusive performance, for which only 50-60 tickets will be sold. Proceeds from ticket sales will also go toward the musician’s charity.

Duvvuru said a performance of The Lumineers’ “Stubborn Love” inspired him to begin Social Sessions. Its intimacy seemed like the perfect opportunity to allow people to get to know musicians in an entirely different way.

“After watching that performance, I started wondering how I could bring something like it here,’” Duvvuru said. “In a close-knit setting, musicians can have a platform to share their stories and bring attention to issues that are important to them.”

Duvvuru brought his idea to Pendery, and the two began working on Social Sessions. The co-founders had previously bonded over their love of music and social projects, and Pendery said they were interested in bringing their two passions together.

“Ideally, these sessions are a great way to get to know people,” Pendery said. “The way that we’re connecting charity and entertainment, people will be able to walk away not just seeing a band they love, but knowing their money went toward a great cause.”

A test-run earlier this year brought together some of their friends for a performance from Texas band Tahoma. Duvvuru said the session was well received by friends who appreciated that Social Sessions appealed to people’s different interests.

“People reached out after and told me how great they thought the idea was,” Duvvuru said. “They said they liked it because there’s something in it for everyone. They can hang out in a close setting, enjoy music and, in the end, donate to an important cause.”

At the end of their Kickstarter campaign, the two plan to celebrate with a Social Sessions party where Austin musician Jane Ellen Bryant will perform. She said Social Sessions gives musicians the opportunity to let audiences learn more about them.

“[Social Sessions] can really help give a story to the music,” Bryant said. “It’s really great that audiences can connect with us through our music and the causes that matter to us.”

In addition to bringing together fans and musicians, Duvvaru said it’s important to involve the community by including Austin vendors
as well.

“We want Social Sessions to be relevant to Austin,” Duvvaru said. “It would be so special for everyone to connect over local food, alcohol
and musicians.”

By combining Austinites’ favorite pastime with the chance to make a difference, Pendery said she hopes the events will get the support they need to occur regularly.

“Austin is a very passionate and supportive city,” Pendery said. “I want to see people rally around this. I want to see the colleges and students get involved so it becomes something they look forward to every month.”

The two said they hope to eventually extend their sessions to cities across the country, catering to different music and cultural scenes all while giving back to a variety of charities.

“Music is something everyone can connect to,” Duvvaru said. “We want to expand those connections to different cities and make entirely different experiences there.”