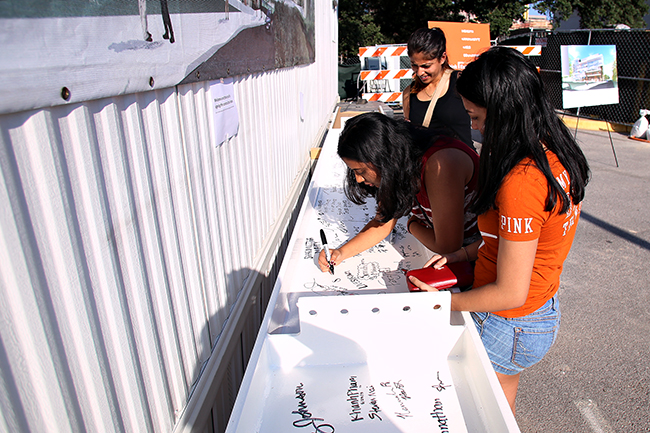 Top University and state officials attended the topping out ceremony Wednesday to celebrate placing the final steel beam in the framework of the Dell Medical School.

UT President Gregory Fenves and Sen. Kirk Watson (D-Austin) were part of a small group of officials who toured the medical school construction site and added their signatures to one of the final beams lifted into place.

John Daigre, executive director of communications for the Dell Medical School, toured the construction zone along with Fenves and Watson.

“We’ve been working on this project conceptually through renderings and things like that,” Daigre said. “To see it in person has been exciting. It’s a huge project, and I think it’s going to be a really exciting kind of gateway both to downtown and to the whole city.”

Fenves said the tour was eye-opening.

“What stuck out with me is the size,” Fenves said. “We look at the drawings, and we look at square footage. But when you actually see how big our facility’s going to be and what we will be able to do in hiring faculty, training physicians and educating students and treating patients, it’s really amazing how big it really is.”

More than 300 people showed up to sign the beam Tuesday, according to Daigre.

“It was just such a testament to the fact that the community is behind this project,” Daigre said.

Watson described the medical school as an important addition to UT and the Austin community.

“It’s a wonderful thing that they’ve done as a symbolic showing of how the community is part of this medical school,” Watson said.

The Dell Medical School will be the first new medical school to be constructed at a member of the Association of American Universities (AAU) in 50 years.

Fenves said the medical school will be a crucial part of the future of the University.

“With all the changes in healthcare and all the opportunities for future change in healthcare, we’re going to have the medical school fully integrated into the teaching and research mission of the campus,” Fenves said. “So, it’s giving us a lot of new opportunities in new areas of health and medicine to pursue at the campus.”