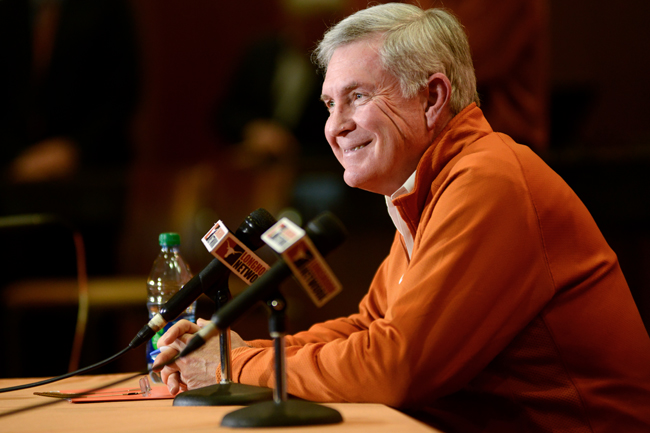 Mack Brown speaks to media in December 2013 at Darrell K Royal Texas Memorial Stadium about stepping down as the head coach of the Texas football team. Brown will receive the lifetime achievement award at the Paul “Bear” Bryant Awards on Jan. 13, 2016.

Working as a college football analyst for ESPN, Brown’s job now involves analyzing teams for TV audiences rather than running practices and preparing for opponents. With less than two weeks until the Longhorns’ season opener, Brown said he likes what he sees from his former team.

“I think Texas has the chance to be good,” Brown said in a conference call with the media on Wednesday. “Obviously, there needs to be consistent quarterback play, … but they have everything else in place.”

Texas relies on junior quarterback Tyrone Swoopes — one of Brown’s recruits — to run its offense this fall. His turnover struggles plagued the Longhorns through last season’s 6–7 campaign, but Brown preached patience with young quarterbacks while citing a former pupil and Longhorn legend.

“When you’re looking at guys like Tyrone Swoopes and young quarterbacks, … we have to make sure we give them a chance,” Brown said. “As a society of coaches, we’re not very patient with players. If we weren’t patient with Vince [Young], we might not have won a national championship.”

Brown said he thinks Texas head coach Charlie Strong will fare better in his second season at Texas. He also emphasized that a coach’s second year is easier than the first, because the players know the system and the coach’s philosophy.

While he hasn’t watched the team practice yet this season, he’s heard plenty of positive things from his successor.

“I’ve talked to Charlie [Strong] quite often, and he seems excited about this team,” Brown said. “I’m excited to watch them play.”