Science Scene: Studying with tunes can give students the blues 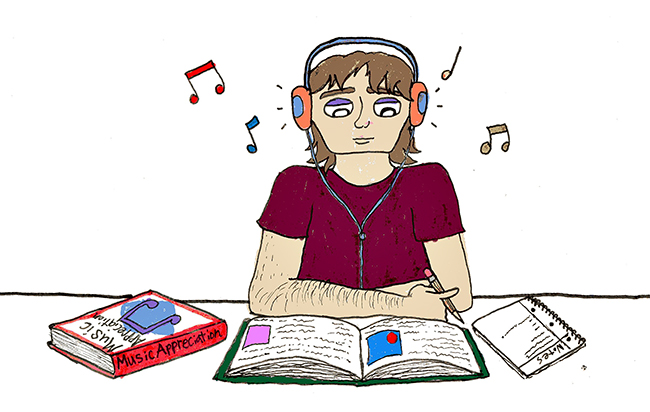 Students can use music to get hyped for a workout or to turn cleaning into a dance session, but they should think twice before putting in their earbuds while they study.

In the early 1990s, scientists found listening to music before completing a spatial reasoning IQ test can improve spatial reasoning scores, which helps students with subjects such as calculus and architecture. The effect, named the Mozart Effect, stole the public’s imagination and caused products such as Baby to flourish.

But since then, a majority of studies have not been able to recreate the Mozart Effect. These studies generally show that any irrelevant noises, including music, do not help participants who are trying cognitively challenging tasks, such as reading comprehension or memorizing strings of numbers.

These findings do not mean that students should completely discount music as a study tool. When they listen to music — either before, during or after studying — determines its effects on their learning capabilities.

Students who listened to enjoyable music before they studied experienced increased alertness and better moods.

This boost led to an improved cogntive performance, according to a study in the journal Applied Cognitive Psychology. This effect is less noticeable if the participant listened to music they dislike. Scientists found the Mozart Effect to be true, because many participants in the 1993 study enjoyed Mozart’s work. It could just as easily have been the Schubert Effect or the Taylor Swift Effect, depending on the listener’s preferences.

Although music can be beneficial before studying, students get distracted by music while they work, even if they enjoy it. Students report feeling less distracted while they listen to music they like, rather than dislike, but they score equally poorly on simple cognitive tests. The participant’s distraction increased if the music was fast-paced and loud.

The distraction decreased if the sound was repeated over and over again, and unfamiliar music was more distracting than familiar music, according to a study in the British Journal of Psychology. The more college students reported listening to music while they study, the better they could do both. Students did best on tasks when they had complete silence.

But music isn’t the only variable. Personality makes a difference in how well participants respond to music while they try to do cognitive tasks. In a study at Glasgow Caledonian University, introverts were more susceptible to becoming distracted than extroverts.

After studying, students may benefit from relaxation music. People are less anxious when they listen to music as opposed to silence, according to a study in the Journal of Music Therapy. Students remember more if they relax after they finish studying rather than immediately moving on to another demanding task, so it may be useful to play calming music after a long, grueling work session.

Students can tailor their playlists to fit their academic needs with pump-up jams before studying, silence while they study and soothing music afterwards. By avoiding distracting music while they study, students can make sure that their test-time theme plays in a major key.