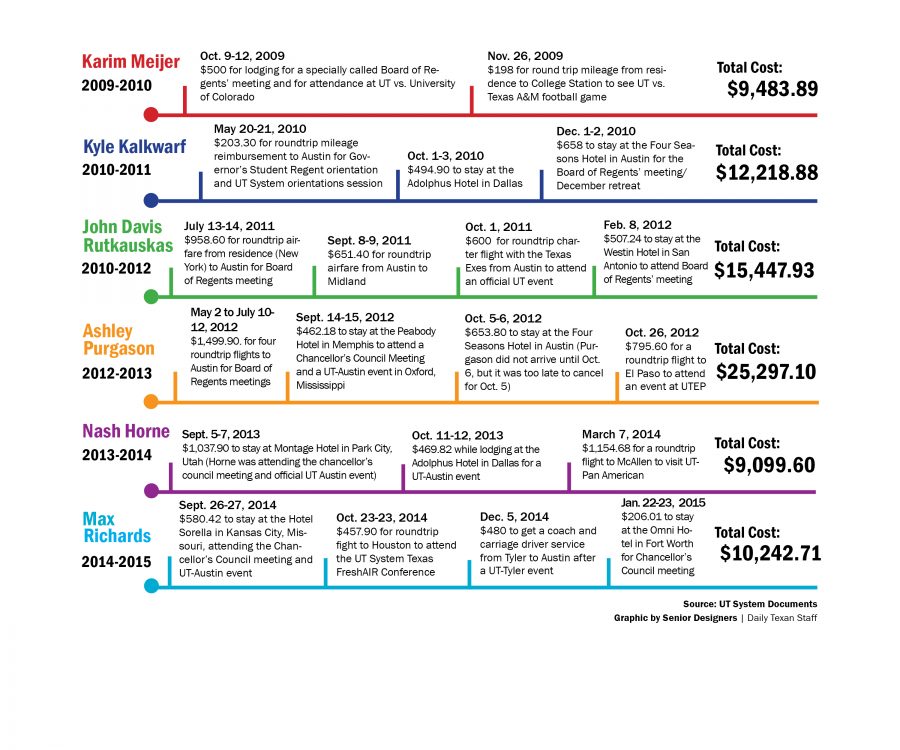 Student regents on the Board of Regents have cost the UT System more than $80,000 since 2009, according to public records obtained from the System.

The UT student regent serves a one-year, non-voting term and, according to the UT Systems website, the System reimburses the student for any expenses related to Board business. The records show a majority of the expenses were for travel and lodging.

“We recognize there are expenses associated with the travel, but ensuring the student perspective is always considered as we make our decisions is an investment that is well worth it,” Foster said. “The result is that we are able to craft policies that reflect the needs of the entire UT System, including students.”

According to the System documents, the System spent over $25,000 on 2012–2013 Student Regent Ashley Purgason — the highest amount among student regents from 2009–2014. Purgason was a student at UT Medical Branch (UTMB) in Galveston and spent more than $15,000 on travel and airfare as well as more than $4,700 on lodging.

According to the documents, Purgason spent more than $1,000 on Dec. 15–16, 2012, when traveling to St. Louis, Missouri, and attending a University function in Louisville, Kentucky.

Purgason did not respond to a request for comment.

UT System spokeswoman Karen Adler said the System reviews expenses for all regents before the payment is made.

“All expenses paid or reimbursed for members of the board, including the student regent, are carefully reviewed by an accountant and by an attorney in the board office and submitted for further review by the UT System’s office of accounting and purchasing services before payment is made,” Adler said.

Kyle Kalkwarf, student regent from 2010–2011, was a medical student at UT Health Science Center at San Antonio at the time of his term. According to the documents, the UT System spent $658 for Kalkwarf to stay two nights at the Four Seasons Hotel in Austin for a Board of Regents meeting in December 2010.

“That weekend there were no other hotels available, and that was the cheapest one,” Kalkwarf said. “I don’t know what the weekend was, but I felt uncomfortable. I remember talking to the secretary I worked with to try and avoid that in the future.”

Adler said a UT-Austin student regent would have fewer travel expenses than a regent from a different UT branch because he or she would reside in the same city most meetings are held.

Some of Richards’ expenses included attending athletic events on other campuses. Richards said he thinks it was important to attend these events because it provided him a better understanding of campus life.

“Going to sporting events gives a person a strong sense of the campus culture,” Richards said. “While I attended the UTSA football game, I was able to get a better understanding of what it means to walk in the shoes of a UTSA student. Similar to UT-Austin, many of the traditions and pre-game activities associated with a home football game give a glimpse into the identity of an institution.”

“Being a state institution, there are very precise rules governing what expenses are covered and to what extent they are covered,” Drake said. “For example, in my case, these will primarily be related to travel and lodging. I anticipate that there will be situations where expenses may not be covered, and I will gladly pay for these myself.”