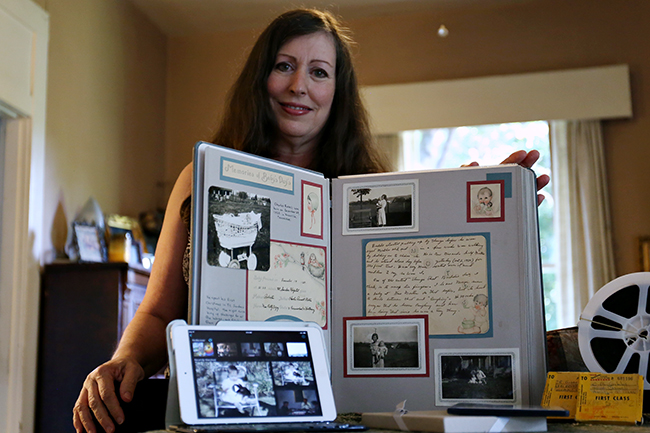 On a daily basis, people entrust UT alumna and “mom-preneur” Cara Cotham with the things most precious to them — their memories.

Cotham, a mother to triplets, is a legacy maker at  Legacy Republic — a company located in Santa Clara, California that offers digitization services for people’s most treasured memories. The company converts old VHS tapes, movie film reels, images and photo albums into digital formats on a single cloud account. Customers can also receive a high resolution DVD as a hard copy.

As a legacy maker for over a year, Cotham’s job is to consult with customers to turn their tangible visual media into digital files that can be accessed at any time. She visits the homes of different families, who then ship to her their prized photo albums, VHS tapes and more for digitization.

“There are so many people who have vintage visual media that they have forgotten about or don’t know what to do with, and now is a critical time to digitize,” Cotham said. “[The vintage media] is deteriorating quickly, and we need to remind people about bringing it back in their lives.”

Cotham said especially now, in the technological age, more companies and families are digitizing their visual media. Recently, Cotham said she witnessed the benefits of her job firsthand when her mother dug up more than 70 old film reels and sent them to her to be converted.

“The treasures I have found on that are amazing,” Cotham said. “My father was in Vietnam, and he filmed while he was in Vietnam. He died in January, so this was a treasure to us. He made a three-minute video specifically for his kids, and none of us had ever seen that until now.”

Cotham said what makes her job at Legacy Republic special is that the legacy makers are truly passionate about getting to know each family’s personal story — her favorite part of the job. Cotham encourages people to digitize their cherished visual media before they deteriorate or accidentally get damaged. Cotham’s close friend recently lost 20 VHS tapes, which were damaged due to the unanticipated Memorial Day flooding in Austin.

“It just makes you realize it’s not helping you to put it off,” Cotham said. “It takes a little bit of effort to find [the visual media] and hand it over, but what you get back
is priceless.”

Cotham’s longtime friend Amy Chamberlain has used her digitization services for several of her cherished heirlooms. Chamberlain said she has turned several of her scrapbooks into iBooks she can view on her iPad, which she plans to give her kids when they are grown.

“It was nerve-wracking handing [my daughter]’s baby book over to Cara at first,” Chamberlain said. “But now I trust the process completely.”

Cotham said another client, whose brother had passed away, was sorting through his possessions when she found more than 40 home videos he had filmed of his kids. The client decided to give the videos to Cotham to digitize so that her brother’s children would have memories to remember him by.

“That’s the beauty of it,” Cotham said. “You’re not just archiving it — you’re bringing [the memories] back into your life in a way where you can share and connect and strengthen family relationships.”

Correction: This article incorrectly stated the location of Legacy Republic. Legacy Republic is based in Santa Clara, CA. Additionally, the article misstated how long Cotham worked as a legacy maker. Cotham has been a legacy maker for over one year. This article also stated that "Cotham’s close friend recently lost 20 VHS tapes, which were damaged due to the unanticipated Memorial Day flooding in Austin." This detail is incorrect, and has been removed.