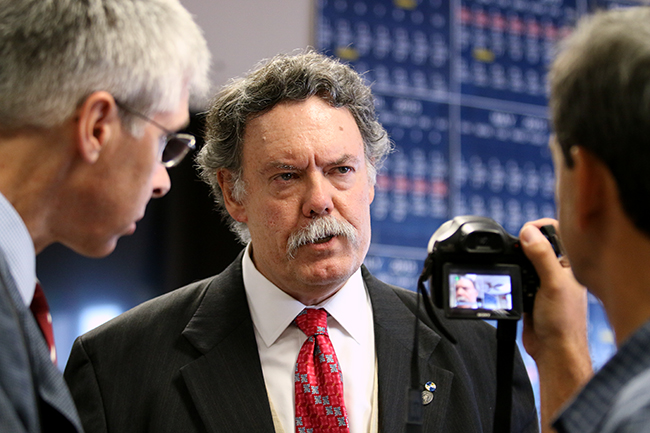 Representatives from UT and the Sons of Confederate Veterans gathered for a hearing at the Travis County Court on Thursday, where a temporary injunction regarding the removal of the Jefferson Davis and Woodrow Wilson statues was denied.

Judge Karin Crump denied the temporary injunction to the Sons of Confederate Veterans, who filed a temporary restraining order to keep UT from moving the statues after University President Gregory Fenves decided Aug. 14 to remove the statues from the Main Mall.

Gregory Vincent, vice president of diversity and community engagement and chair of a task force that made recommendations to Fenves regarding the statue, said the University would start working on removing the statues within the next couple of days.

Kirk Lyons, attorney for the Sons of Confederate Veterans, said he does not know whether the group will appeal the decision. Lyons said if the statues are removed, it would lead to the removal of all of the statues, except for Barbara Jordan and Martin Luther King Jr.

“When you start cleansing statues from a center of higher learning, it’s just a dangerous precedent,” Lyons said.

David Littlefield, a former administrator in the School of Pharmacy and the third cousin of George Littlefield who testified in favor of the Sons of Confederate Veterans, said the statues should remain on the Main Mall. George Littlefield formerly served as a University regent and gave significant funds to establish statues at UT.

“I think it is just absolutely offensive to move those statues based on someone being offended by those statues,” David Littlefield said.

Lyons also presented Glen Umberger, a recent grad from Savannah College of Art and Design and witness, who said the statue should remain where it is due to the fragile nature of the statue.

“You are dealing with 82-year-old bronze,” Umberger said. “Naturally, bronze is fragile, and because [the statues] have not been maintained, they are more fragile. There are a lot of unknowns about the state of materials.”

According to Umberger, it could cost about $100,000 to relocate each statue, and the operation could result in cracks on the figures of Davis and Wilson.

Patrick Sheehy, co-founder of Vault Fine Arts, said the company has removed over 1,000 art pieces and sculptures throughout the years and has worked with UT in the past. Sheehy said the removal process should be relatively quick and inexpensive.

Lyons said the relocation of the Davis statue to the Dolph Briscoe Center for American History would diminish its prominence from its present location on the Main Mall. However, Vincent said the decision to move the statue to the center will provide a place for the University community, as well as visitors, to see the statue.

“The fact that it will be placed in one of the world’s history centers is a prominent location,” Vincent said. “As a professor for over 20 years, learning happens well beyond the classroom. The Briscoe Center is a well received place for students not only at UT but K-12 and community members.”