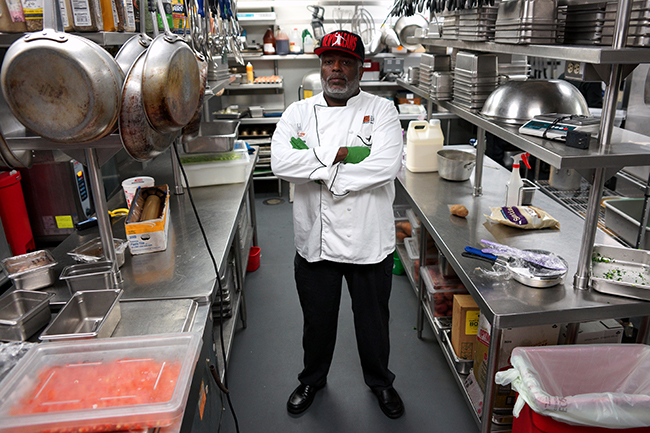 He misses the city where he was born and raised. He misses Bourbon Street and Mardi Gras. He misses the food — jambalaya, blackened catfish and gumbo. Most of all, Owney misses spending time with his mom, who didn’t make it out of the storm in time.

“They were trying to get out, and she had a massive heart attack and didn’t make it,” Owney said. “The last thing I remember her telling me was she was proud of me and she loved me. It was all gone that day.”

At the time, Owney was working as a chef at Loyola University New Orleans. While his wife and six kids were able to evacuate in time, Owney and other members of the University’s essential personnel staff stayed behind to make sure the students who remained were fed and taken care of. At the last minute, the staff was told they would no longer be needed.

“We needed to make other plans, but by then, it was too late,” Owney said.

While his family evacuated to different states, Owney found himself in the midst of the storm. He spent about a week in the Superdome, where more than 14,000 people took shelter.

“It was hell,” Owney said. “We had people in there that were just trying to survive. There wasn’t running water. We had ankles in feces. Some people just got together and prayed.”

After leaving the Superdome and making his way to Texas, Owney located his family members and settled in Austin, where he found a job at the University as a prep cook. In 2007, Owney completed his bachelor’s degree in business management at the University of Phoenix Online and was eventually promoted to a chef manager position, one of 13 on campus.

“The University embraced us,” Owney said. “So many cities embraced victims of Katrina and gave them a new start. We slowed down a little and were able to breathe a little better.”

Owney said he’s grateful he still gets to pursue his passion for cooking. At a young age, he started doing most of the cooking for his four sisters and single mother while she supported them. After Katrina, he said he used his work to find peace.

“Cooking kind of helped me hold everything together,” Owney said. “I just had to do something.”

UT chef Robert Mayberry, who has worked with Owney since he first started, said Owney has remained dedicated to the city he loves, often sporting his New Orleans Saints hat during work. Mayberry said Owney has influenced recipes at dining halls across campus with his Cajun and Creole flare.

“[Owney] was able to not only improve some existing recipes but also create some new ones, like crawfish sliders,” Mayberry said. “Our jambalaya and gumbo have all gotten better since he’s been here. He’s a real asset.”

Now a minister at South Austin Community Church, Owney shares his experiences and trains members on survival techniques with a relief network in Austin. Owney is currently working toward his master’s degree, and he hopes to one day start his own catering company that donates leftover food to homeless people, something he already does in his day-to-day life.

“I was once homeless from Katrina, so I tell these guys: ‘Just because you’re down doesn’t mean you have to stay down,’” Owney said.

Owney said Katrina was a learning experience for the whole world because it taught first responders how to be more prepared for future disasters. He said, personally, the experience strengthened him.

“It gave me a whole new purpose in life,” Owney said. “I enjoy life more now. If I survived that, that, to me, pretty much means I can survive anything that’s put before me.”