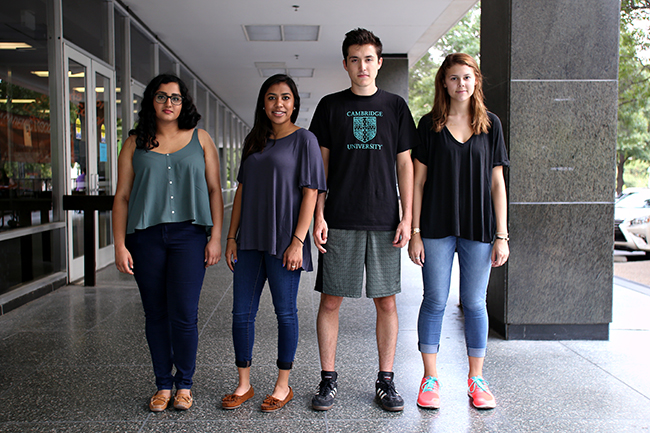 When four UT students registered for a philanthropy class, they expected to learn what it means to give back. They never expected to leave the class with $25,000 to fund a school in Africa.

The team received the money in May, at the end of “Philanthropy: The Power of Giving.” The signature course requires students to research a charity and create a presentation to potentially receive funding for an organization of their choice. The group members chose to support Pencils of Promise, which is dedicated to building schools in countries that lack the resources to provide quality education to its citizens.

“We want to give other kids the chance to pursue an education,” said Karishma Thakor, biology sophomore and team member. “We realize how fortunate we are to live in the United States, and we want to make it a priority to contribute to the success of others.”

Within the class, the group earned the most amount of funding, which helped it achieve its goal of sponsoring the construction of a school in Ghana. A construction team located in Africa is currently building the school, but the students said they still feel included in the project. In addition to making a dedication plaque for the school, they receive photos and updates of progress through impact reports.

Hannah Denitz, development coordinator at Pencils of Promise, serves as the main contact for the students and notifies them about the work being done in Ghana.

“We believe it is important to be transparent throughout the whole process,” Denitz said. “We want our supporters to understand how their efforts have changed lives and communities forever.”

Thakor said her group wanted to make sure their donation didn’t fall through the cracks and would actually make a tangible difference. The group members didn’t think donating $25,000 to a multi-million dollar organization would create the impact it desired. Thakor said keeping track of the work being done across the globe allows them to visibly see the impact they are making.

Although they’ve completed their work for the class, the students’ ultimate goal is to sponsor building one school per year. They plan to host fundraisers and events to raise money through becoming a student organization at UT.

English and government sophomore Ben Wallace said he is excited about the club, because he wants to raise awareness about an organization he feels does important work.

“I want people to think more critically about donating and present what a good organization should look like,” Wallace said.

Once they register the organization, the students plan to design t-shirts, collaborate with other on-campus clubs and write letters to students in countries they want to build schools in.

The team members said they are excited to expand their outreach and include other students at UT in their effort to change the state of education in countries that need help.

“We just can’t let go of this opportunity to make a change in the world,” Thakor said. “I am so excited that these children will now have the chance to pursue their dreams and careers.”