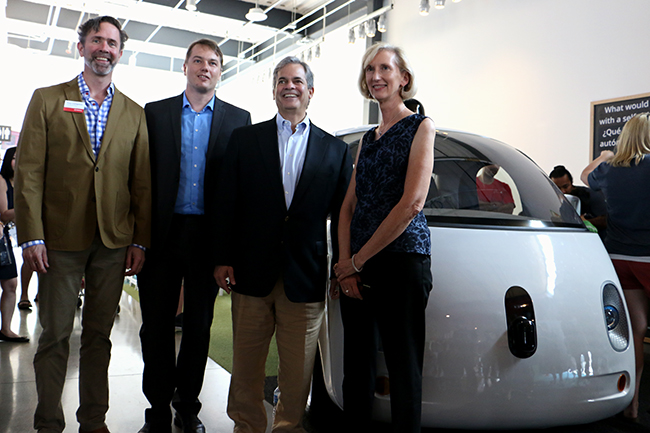 Google is sending three prototype self-driving cars to Austin next week, after representatives from the company tested six of their older models in the city for the past two months.

“We truly love testing new things around here,” Adler said. “It is impossible for this city not to want to participate in trying to help shape the transportation of tomorrow.”

The cars run on the same software as the six formerly tested vehicles, and Google’s team of test drivers will test the cars over the next few weeks, Adler said.

Chris Urmson, director of the Google Self-Driving Car Project, said he is grateful to Austin for the opportunity.

“It’s been incredible, the spirit and openness that Austin has shown to us,” Urmson said. “In the U.S. we kill 33,000 people on our roads every year. … There’s an incredible opportunity to do good here.”

Urmson said the prototypes are designed with extra safety measures, including surround sensors and softer windshields, which cushion pedestrians from collisions.

“The car is designed with layers of safety,” Urmson said. “It begins with sensors that can see up to two football fields around it and process that information that gives us safe driving behaviors.”

Jennifer Haroon, head of business operations for the project, said Google chose the city of Austin because of its innovative culture.
“We’ve been here in Austin for about two months,” Haroon said. “I have to say that Austin has been extremely welcoming to us. [Austin is] known as a community that is quite vocal.

We really wanted to hear that feedback. We wanted to learn how people want to use self-driving vehicles, how they interact with them on the road.”

Any community member can provide feedback on Google’s self-driving cars through a URL on the back of each vehicle. Google also publishes monthly reports about their activity on its Google Plus page.

“Austin is the first city selected for this kind of out-of-project area testing,” Adler said. “There’s no better place for this because of the creativeness, innovation, entrepreneurial spirit and the desire for advanced mobility in this city.”