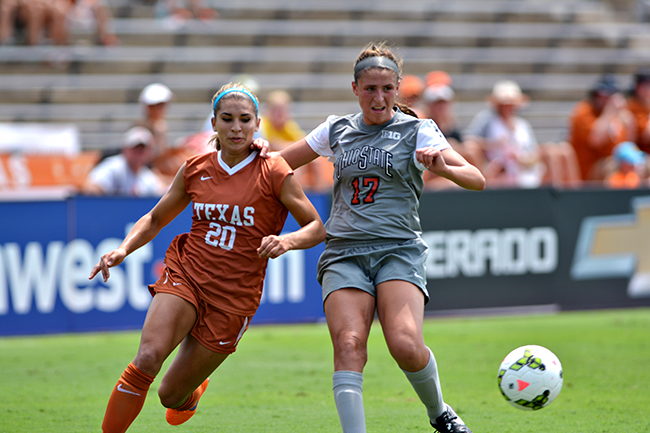 The only Texas player who has scored this season is goalie Abby Smith.

Her teammates remained scoreless this weekend, as Texas lost to No. 5 North Carolina on Friday night and tied with Ohio State on Sunday afternoon.

Texas hasn’t scored since Smith connected on a 90-yard cannonball on Aug. 23.

Texas attempted 17 shots Sunday, two less than its average of 19 shots per game. The goalie blocked seven of those shots, and 10 didn’t threaten to go into the net.

“Well, we need to take advantage of our opportunities,” head coach Angela Kelly said. “Today we created opportunities and somebody needed to have the capacity to take that responsibility and put the ball in the back of the net for us.”

Texas didn’t have many opportunities in the first half. A lot of passes sent to players pushing forward were hit a bit too hard and traveled a bit too far. The Longhorns only managed three shots in the first half, and only one was a shot on goal that Ohio State goalkeeper Jillian McVicker needed to corral.

“First half, we didn’t take care of the ball,” Kelly said. “We gave the ball away far too many times and played a little bit tense and tentative.”

Kelly talked to her team at halftime about the aggressiveness and tenacity displayed in the first half, and the message seemed to work. Four minutes into the second half, freshman forward Mikayla Flores fired a four-seam fastball from 8 yards out. The ball went straight to McVicker.

About 20 minutes later, freshman forward Alexa Adams got a rebound from a corner kick, but she wasn’t able to plant her left foot to get enough power on the ball. Instead of the white ball mimicking a cannon ball being fired, it had the velocity of a marshmallow that was thrown.

“I thought our playmakers did a better job of playmaking [in the second half],” Kelly said.

But Texas failed to capitalize on opportunities to score its first offensive goal of the season.

“We had some [opportunities] at the top of the box,” Flores said. “We had some good balls wide … our touches were off, but we’ll get there eventually. We just have to keep working hard.”

The Longhorns’ offense didn’t come through, but their goalie did. Smith had eight saves on the day, with the most important save coming at the end of the game.

Twenty seconds before regulation ended, Buckeye forward Nichelle Prince sent a through ball to midfielder Nikki Walts. Smith had six saves up to that point, but she needed one more to preserve the tie.

Walts fired. Smith braced and got her right arm on the ball, deflecting it to keep the score tied.

The game went into sudden-death overtime, which consisted of two 10-minute halves.

The Buckeyes managed two shots in overtime to put them at 18 shots for the game, four above their average.

Texas also blew its chance Friday night against the No. 5 Tarheels. The Longhorns only managed seven shots against UNC, and of those seven shots, the goalie only handled two.

Smith was saving shots left and right, but her efforts weren’t enough. Four minutes into the second half, Texas made a costly error when defender Aaron Strawser turned the ball over in the box, and UNC’s midfielder Cameron Castleberry had a chip shot for a goal. Two minutes after Castleberry’s goal, midfielder Joanna Boyles got the rebound off UNC forward Summer Green’s shot. She sent an 18-yard shot into the right side of the net. Texas lost the game 2-0.

Smith’s defense Sunday kept Texas from falling to 1-2. Without her offense, the Longhorns may be winless up to this point.

In order for Texas to improve its record, its offense needs to start scoring.