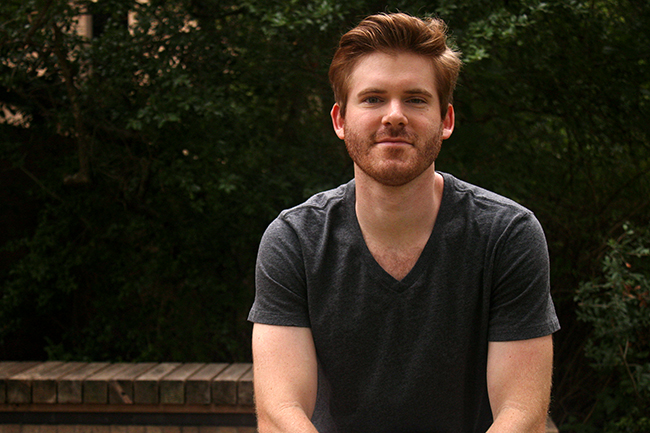 From Gregory Plaza to the foot of the tower, UT alumnus Jonathan Fox has brought his country-tinged brand of rock music all across the 40 Acres.

As the frontman of the Jonathan Fox Band, Fox often performs at UT events, such as last semester’s 40 Acres Fest and this year’s Longhorn Welcome, and he is scheduled to play at the Texas Exes’ fall kickoff party Sept. 11. In March, he began pursuing music full-time and is currently working on the first few tracks of his new EP.

Fox said support from the University’s community and word-of-mouth promotion from gigs have helped make his career possible.

“A select two or three people hung out at a fraternity fundraiser last year and talked to us after, which is how we got the Longhorn Welcome gig,” Fox said. “That’s definitely the support that I need, and that we’re getting from UT students.”

Fox said his increasing popularity has allowed him to book between 80 and 85 shows this year — over twice as many shows as in 2014. Fox said some of this is the result of the loud, guitar-driven style of his 2014 album 20 Something Runaway, which he feels demonstrated his ability to entertain a crowd. Though he began his career playing at loud bars such as Maggie Mae’s, Fox said he prefers more intimate venues. When he’s not performing on campus, Fox can be found on stage at venues around Austin.

“I love to play at places where people are there to see you and really listen to the music, and you’re not just entertainment for the bar,” Fox said. “I really hope people will focus more on the voice and melody and lyrics on my next project.”

Fox draws inspiration from his experience growing up in a suburb outside Dallas, where he spent nights watching country musicians play local venues.

“I remember hearing a Pat Green song when I was 15 and wanting to play more country stuff after that,” Fox said. “Seeing the Randy Rogers and Eli Young bands at Billy Bob’s really pulled me in.”

Fox said he feels himself pulling away from the heavily country sound of his older works in pursuit of a gentler, acoustic sound but plans to keep a southern aspect in it.

“I think [the new EP] could identify with a lot of people who like certain styles of music but not that real Deep South,” Fox said. “I always feel like Texas is its own entity, even though it’s got some Southern feel.”

UT alumnus Tristan Boyd, the band’s drummer, said he has witnessed Fox’s transformation firsthand. The pair met through a Craigslist ad and immediately realized they worked well together.

“Making sure you have a similar vision on some level is pretty important. If you can’t agree on a musical level, you have a lot more trouble,” Boyd said. “There’s definitely a pretty strong connection between us musically, and that was apparent from the first couple of shows we did together.”

Boyd said the mutual trust he shares with Fox leaves plenty of room for musical exploration. Fox said he acknowledges the risks implied by a departure from his original style but feels the need to stay true to himself.

“If you worry too much about what someone else is going to think about it, then it’s going to get jumbled.” Fox said. “But I hope people will enjoy it.”