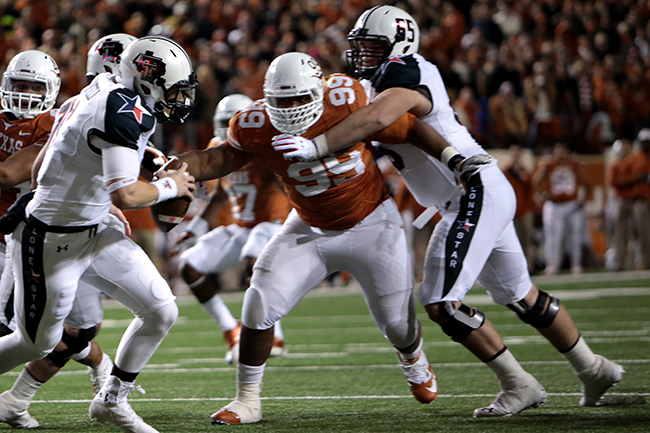 Desmond Jackson just wanted to get back into the game.

“[The training staff] didn’t know what was going on,” Jackson said. “I told them ‘shoot, wrap my foot up as much as you can … TankI need to get back on the field.’”

During Texas’ game against UCLA on Sept. 13 last season, as Jackson made a routine tackle, a Bruin offensive lineman fell on his right foot. In the locker room, Jackson tried desperately to prove he could play, but he couldn’t stand on his foot.He watched his teammates fight their way to six wins and saw them fall to TCU and Arkansas in blowout fashion to end the season.

“There were times when I wanted to give up,” Jackson said.

Jackson, a fourth-year senior then, was granted another year of eligibility. In May, he graduated with his bachelor’s degree in youth and community studies. He was also cleared to begin working out again.

Strength and conditioning coach Pat Moorer had no plans on easing him back into workouts. Instead, Jackson, whose nickname is ‘Tank,’ ran a mile and a half during his first workout. He doesn’t remember his time – he just remembers plowing his way to the finish line thinking, “What in the world is going on?”

But his perseverance through his injury impressed both head coach Charlie Strong and his teammates. Strong said Jackson has done a great job getting back on the field, and he’s excited for the veteran leader to be back on the defensive line.

“Tank has just always been a guy that’s going to go as hard as he can whenever he can,” Davis said. “Whatever he can do, he’s going to do it. He’s just a guy who’s always going to work for you.”

After working through his foot injury, Jackson doesn’t take things for granted anymore. He is ready to get back in the game.

“One thing one of my coaches told me a while ago was ‘Always stay hungry and humble,’” Jackson said. “That’s one of the things I live my life by. Football is a blessing. There’s no reason to get cocky about because it can be taken away from you at any given time.”