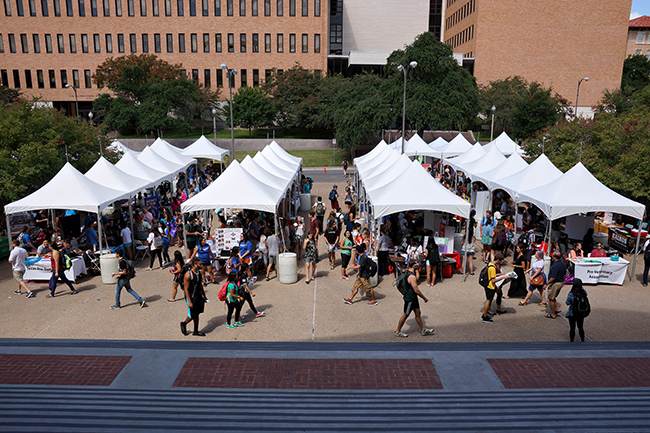 Everything’s bigger in Texas, and Party on the Plaza was no exception.

RecSports hosted the 16th annual Party on the Plaza event in front of Gregory Gym on Wednesday, attracting an estimated 24,000 students who walked through a maze of booths representing 265 student organizations, according to Randall Ford, associate director of recreational sports.

The number of organizations in attendance grew this year by an estimated 30 clubs, according to Jackson Clifford, accounting junior and member of the RecSports committee tasked with planning the event.

“Party on the Plaza is one of the best traditions at UT,” Clifford said. “It offers a unique opportunity for students of all ages to learn more about how to get involved on campus. I am ecstatic about the growth we’ve had this year with more clubs coming out because it gives the students even more opportunities.”

Neuroscience freshman Ivana Valdez said she had not previously known about the event but found time in her day to stop by the event three times in continued hopes of finding the perfect organization for her. She said she enjoyed the chance to find a group suitable to her needs.

“Since coming by the first time, I have liked walking through the booths a lot,” Valdez said. “I am trying to find a good club to join, and I feel like I can here because there is such a large variety. I feel like this is where connections are being made — between other students in the same boat as me, who are looking for something, and with club members trying to recruit.”

Finance senior Puja Patel, president of the UT Hindu Students Association, has attended the event for the past four years. Patel said Party on the Plaza is one of the largest recruiting events for her organization.

“Other recruiting opportunities we have, such as tabling on the West Mall, are much smaller and our organization can easily be ignored,” Patel said. “But Party on the Plaza is so open and busy, it’s hard for people to miss. No other event gives such a broad range of opportunities. At other events people can feel out of place, but here the setting makes everything feel more inclusive. This event is for every student.”