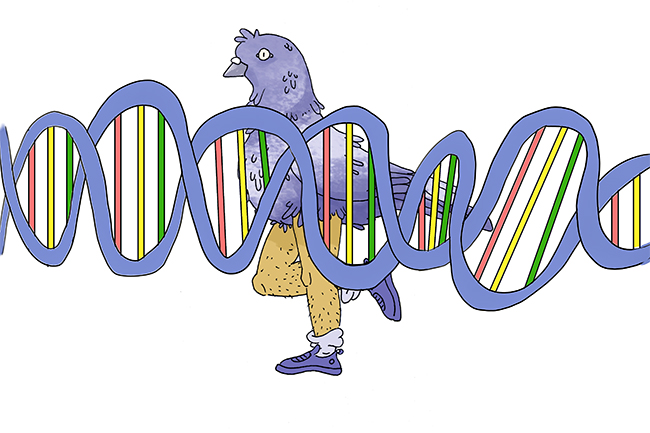 Mass extinctions have changed the face of the Earth five times during life’s 3.5-billion year history, and some scientists argue that we are on the brink of another.

Researchers are scrambling to find ways to predict how another mass extinction ­— defined as the loss of 75 percent of existing species — will affect the planet’s future. Here at UT, post doctoral researcher Joel Lehman and computer science professor Risto Miikkulainen have published computational experiments that model how massive extinction events affect evolution found they accelerate evolution.

“I like to make algorithms that are creative,” Lehman said. “And sometimes that means reaching across the divide between computer science and other disciplines to see if there are experiments we could simulate that would be very difficult or unethical in the real world.”

Lehman and Miikkulainen have turned their creative algorithms to the problem of mass extinctions. More than 95 percent of all the species that have ever lived on Earth are now history, and mass extinctions are not unique to the late Cretaceous period. Animals such as the mountain gorilla and white rhino might vanish in the wild before UT seniors graduate this spring. Because scientists have not identified most of the species on Earth, let alone studied them enough to get accurate numbers, identifying exactly what and how many species have gone extinct is impossible.

While scientists struggle to make precise predictions, they are able to measure trends. With 5 million existing species, scientists estimate about 10 to 690 species go extinct every year. If reality is in the upper ranges of these estimates, Earth could experience a mass extinction to rival the one that killed the dinosaurs by 2200. Unlike the five massive extinction events over the last 3.5 billion years, this extinction is not because of meteors or volcanoes, but mankind.

The current destruction of ecosystems could lead more quickly to a world that has little resemblance to our own. Lehman and his team at UT have found that, while extinctions are destructive in the short term, they lead to higher rates of evolution over major periods of time.

Extinction destroys genetic diversity in the short term but also leaves ecological niches open for other species to fill.

“Gorillas don’t do well when humans remove their habitat, but another animal, such as a coyote, might colonize that niche if it is less dependent on the habitat that we got rid of,” Lehman said.

The world is changing quickly, and the vastness of evolutionary time may seem incomprehensible to a busy student who has four papers due by next Tuesday. The computational models in this study tracked mass extinction events that happened every 1,000, 2,000 and 4,000 generations, with more frequent extinctions leading to accelerated evolution. Environments that are changing now set up future habitat constraints that scientists can’t accurately predict. The models show not only how animals adapt to these constraints in our lifetime, but what may happen after humankind has gone extinct or moved to Mars.

“We, as humans, have the ability to self-reflect, to ask if accelerated evolution is the right thing or if it validates our behavior,” Lehman said. “I think the answer is ‘no.’ We should conserve species and be responsible with our power over the environment.”

As climate change continues to affect the environment and all the species on the planet, unpredictable changes will happen. Habitats will flood, forests will catch fire and whole ecosystems could fall into the sea. This disruption will no doubt decrease the genetic diversity on Earth in the short term. More studies similar to this one can help researchers understand how human activity is affecting the future of the Earth.