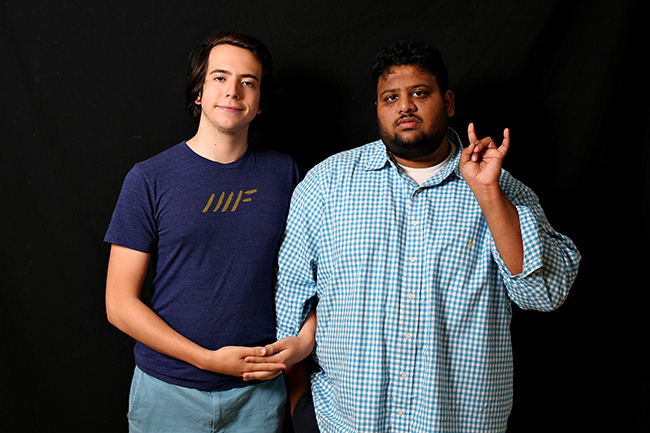 Last year, The Daily Texan wrote about us saying, “We cannot take them seriously until they take themselves seriously.” We promise we’ve changed. We now take ourselves VERY seriously.

Student Government is the official (auto-tuned) voice of the student body, and we are T-Pain and Kanye West in the 2007 hit single “Good Life.” Just like T-Pain and Kanye West, we’ve also debuted 63rd on the Billboard Hot R&B/Hip-Hop Songs. Our life philosophy follows that of Timon and Pumbaa from “Lion King 1½” in that we both want to be a meerkat and warthog and eat bugs all day.

We spent the summer trying to figure out exactly what Student Government is. We still haven’t figured it out quite yet, but we’re beginning to think it’s an elaborate Ponzi scheme. Besides that, we also worked on a few initiatives that were hopefully successful enough to talk about at our next private equity hedge fund investment banking business analyst job interview.

When we were first elected, so many were quick to say that we wouldn’t get anything done. People often said that we were going to destroy the University — which we probably did a little bit. People were also quick to point out that our lack of Student Government experience would hinder our performance. Just remember, not a single U.S. president has ever served in UT Student Government in any capacity, and look where they ended up.

So if you are interested in some of the stuff we accomplished this summer (i.e. want to hear us brag a bit), continue on.

We got J2 to be open 30 minutes later than usual so that you can eat your unlimited mac-and-cheese for 1,800 more seconds every night. Thirty minutes doesn’t seem like much, but if you really think about it, the entire inflationary epoch of the universe following the Big Bang lasted about 10-33 seconds, which means J2 will now be open for what is equivalent to an extra 1.8×1036 inflationary epochs of the universe following the Big Bang.

We also deputized about 30 Resident Assistants and professional staff. We’ll be holding voter registration drives across campus so that we can register your pretty faces to vote. Civic participation is important, or this would all be one big dystopian anarchist playground (aka a country where Donald Trump is president).

We secured funding so that the FAC can be open 24 hours, 5 days of the week and then 24/7 after Thanksgiving break. Either way, you should really develop some better study habits so you’re not up doing O-Chem at 5 in the morning.

Over the summer, we both became ordained ministers ($38 with the Universal Life Church) with the intent of officiating weddings and renewing vows of married students on campus. We look forward to pronouncing you all RotMan and RotWife. Please let us know if you require our services, or else our master’s degrees in divinity will have gone to waste.

Jefferson Davis has come down. The statue is moving to a museum. That’s really about it. Please leave us and our families alone.

Anyway, we’ve had a really busy and fruitful summer. Now we are going to take things as they come. What does that mean? We don’t exactly know. It probably means more fun things like silly videos and getting ready for our 2016 presidential campaign (we will be caucusing with the Modern Whig Party). This brings to mind a great existential question German philosopher Friedrich Nietzsche once posed: “I got money in the bank. Shawty, whatchu think?” Basically, we got a lot more done this summer than we expected, so now we have to figure out what to do with all this time. Feel free to reach out to us with any suggestions and/or goulash recipes.

We hope this year’s Daily Texan Editorial Board likes us more than last year’s Editorial Board. As we promised everyone after we won, we’ll continue to take our jobs seriously, but we will never take ourselves seriously. RotMan 4evr.