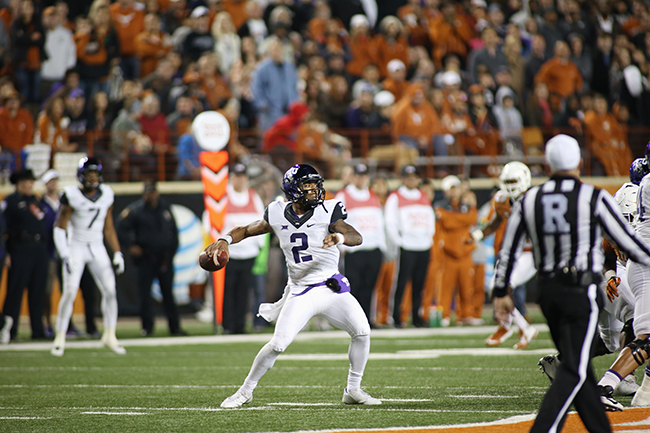 TCU and Baylor enter the 2015 season with high hopes after both teams were snubbed from the inaugural College Football Playoff last year.

The Horned Frogs and Bears start the season at No. 2 and No. 4 in the AP poll, respectively.

TCU welcomes back senior quarterback Trevone Boykin after a breakout junior season in which he threw for 3,901 yards and 33 touchdowns. He added 707 rushing yards and eight touchdowns while leading the Horned Frogs to a 12-1 campaign.

Baylor will replace quarterback Bryce Petty with junior quarter Seth Russell, who performed well last season when he had the opportunity to play.

Each team is capable of going undefeated, but TCU will have home-field advantage when it plays the Bears.

The Horned Frogs begin their season on the road against Minnesota on Thursday. Baylor plays SMU on Friday to start its 2015 season.

The Red Raiders begin their season against Football Championship Subdivision opponent Sam Houston State in Lubbock on Saturday at 2:30 p.m.

Mayfield named starter at Oklahoma
After transferring from Texas Tech and sitting out a year per NCAA rules, junior quarterback Baker Mayfield will start for the Sooners in their season opener against Akron.

Mayfield will get help from Oklahoma sophomore running back Samaje Perine, who ran for 1,713 yards as a freshman, and redshirt freshman running back Joe Mixon.

Mayfield and the Sooners are set to the season ranked No. 19 in the AP poll.

The signal-caller from Rock Hill, South Carolina, made a late run last season, helping Oklahoma State in wins over Oklahoma and Washington.

While Rudolph only has three games of experience, he will start against Central Michigan in the Cowboys’ season opener.

Quarterback a mystery at Kansas State
The Wildcats have four quarterbacks fighting for the starting job, but head coach Bill Snyder has yet to name a starter.

Kansas State kicks off its season against South Dakota on Saturday at 11 a.m.