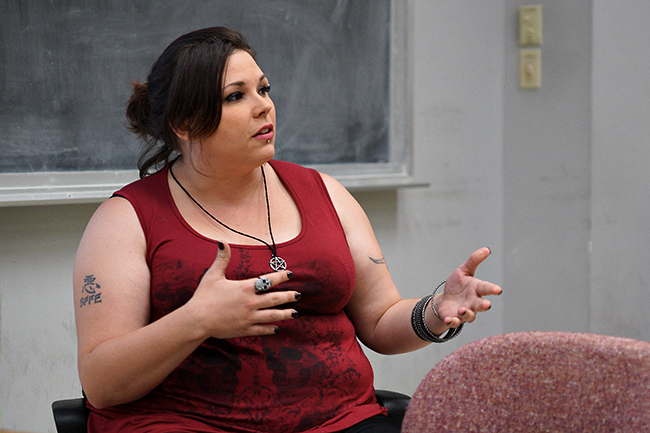 Speakers from pagan, secular and gay and lesbian groups came together to discuss being anti-abortion at the Texas Students for Life semester kick-off event Wednesday.

“People were really interested to hear about these groups that they didn’t know even had a spot in the pro-life movement,” Rappaport said. “We took that and thought this will be really great to get other people into our events that don’t usually come out.”

The event featured representatives from Pro-Life Pagans, the Pro-Life Alliance of Gays and Lesbians, Consistent Life, and Feminists for Nonviolent Choices.

“I think historically the pro-life movement hasn’t been as welcoming to so many different groups like this,” Rappaport added. “We just want to show that here at UT, we’re all inclusive, and we want everyone to come together and show that we’re going to fight for life.”

Cecilia Brown, president of the Pro-Life Alliance of Gays and Lesbians, focused on the challenges her group has faced when presenting themselves as anti-abortion to members of the LGBTQA community.

“There are times we’ve been attacked at pride events,” said Brown. “And that’s happened on the pro-life side too.”

Dawn Kuha, a member of Pro-Life Pagans, said misunderstandings about her background made it difficult to have conversations about abortion.

“We were told we were actually child-sacrificers and devil-worshipers,” Kuha said. “But we love and respect all life. So why would we harm the unborn life?”

All of the panel members agreed the attitudes toward their groups are improving as they find ways to connect with other groups.

“The tides are turning, both in the pro-life and gay communities,” said Brown. “Especially with young people, since they don’t see it the same way, as a privacy issue.”

Taylor Bolt, a Chinese language and culture senior who attended the event, said she appreciated hearing about the experiences of diverse groups.

“I thought it was really awesome to hear all the different perspectives, because so often [the anti-abortion movement] takes a religious view” Bolt said. “I think it’s really important to find the common ground with everyone.”