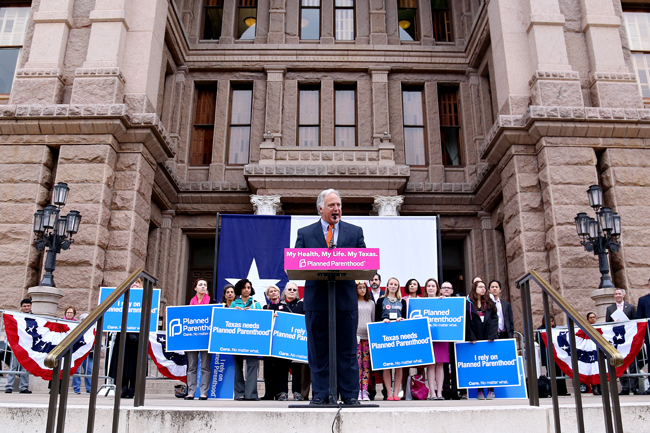 Planned Parenthood of Texas cannot catch a break. The 2015 state budget, enacted on Sept. 1, effectively banned taxpayer Breast and Cervical Cancer Services program funding for any groups that have “contact with or provide funds to individuals or entities for the performance of elective abortion procedures.” As a result, 17 Planned Parenthood centers will no longer be able to partake in the BCCS program, forcing women who utilized Planned Parenthood to go elsewhere. Putting politics first and Texans second is nothing new to Texas women. Sadly, Gov. Abbott and the Republican-led legislature are keeping that tradition alive.

“It’s really incredible how low the governor and some of the state legislators will go when you start throwing women out of cancer screening programs and making it impossible for them to continue to go get services where they have before,” Cecile Richards, president of Planned Parenthood, told The Texas Tribune.

2,938 women turned to Planned Parenthood for services provided by the BCSS program last year. That’s roughly 9 percent of the 33,365 low-income women who participated in the program. By cutting off funding, Texas is making access to quality, affordable healthcare more difficult. Some Planned Parenthood centers provide abortion services, but many more do not. Should the state want to enforce an anti-abortion agenda, they should focus their attention on health centers that solely provide abortion services and not an entire organization that dedicates more time to preventing unwanted pregnancies.

It is notable that the state increased funding for women’s health services for the second consecutive legislative session. But increasing funding does little good unless it offers women, especially those at an economic disadvantage, more health options. Abbott and the legislature think otherwise and will continue to play politics with women’s lives.

Derek Poludniak is an international relations and global studies sophomore from San Antonio.